Unless you’re around the company of like-minded individuals, popular viewpoints have advised against talking about such topics as politics or religion in social settings, however, when it comes to spirituality, the following famous moms have a steadfast strength within their faith that they openly share with others, regardless of public opinion.

1. Mayim Bialik (Orthodox Jew) – In 2015, Mayim Bialik opened up to Fox News about her Jewish faith. “I have an unwavering faith in a power greater than myself and I don’t think that will change any more than my belief in gravity will change,” The Big Bang Theory star shared. “In terms of observance, my social media shuts down for [the Sabbath] and sometimes we go to synagogue, sometimes we stay at home and we do [Sabbath dinners]…I believe in [Jewish law] but I also believe in the permeability and changeability in the structure of Jewish law and I think Judaism has always adjusted to the times that it lived in and it’s adjusting in the time we are in now.” Another aspect of the actress’s faith is her adherence to modesty. “Being a modest dresser, that for me is a certain amount of my religious faith — privacy and chastity. Just because I have a body, doesn’t mean it means to be on display.” 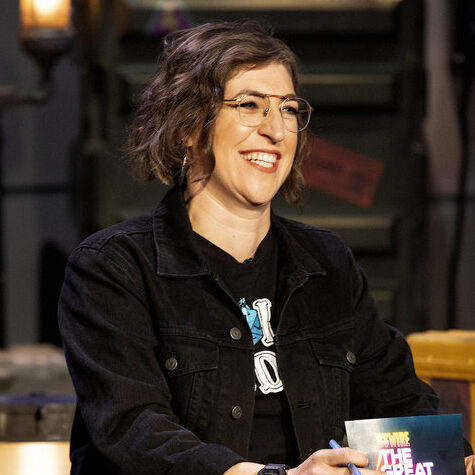 Related: Celebrity Moms and Politics: See Who Shares Your Views

2. Iman Abdulmajid (Muslim) – In an interview with CR Fashion Book in 2017, Somali-American supermodel Iman talked about multiple topics, including her religion. “I’ve heard all types of critiques—as a Somali girl, as a model, as a mom, as a Muslim who does not wear a hijab, marrying a white man, my late husband David Bowie. But you know, I live my truth.”

3. Tina Turner (Buddhist) – Anna Mae Bullock, better known by her stage name, Tina Turner, was born in Nutbush, Tennessee and raised in the Baptist faith. She recalls, “I was born into a Baptist family. I went to church every Sunday… We had a young Baptist reunion to learn about the Bible and it put me in touch with information about God and Jesus and being nice to people. My mother taught me that saying the Lord’s Prayer would help me, so I kept saying it straight through life until I was introduced to Buddhism.” In 1971, a close friend suggested Turner try the religion, and three years later, the Grammy winner converted to the faith. The singer credits Buddhism and its spiritual chant for helping her to endure during difficult times, in particular her claims of severe domestic abuse against her by her ex-husband, Ike Turner.

4. Mindy Kaling (Hindu) – In a 2011 interview with Jezebel, actress Mindy Kaling talked briefly about her religion, “But I do consider myself Hindu. I wrote an Office episode about the Hindu holiday Diwali.”

5. Kirstie Alley (Scientologist) – Kirstie Alley was raised as a Methodist, but has been a member of the Church of Scientology since 1979. At the time she became a Scientologist, Alley admitted to having had a cocaine addiction and went through Narconon, a Scientology-affiliated drug treatment program. She credits the church with helping her overcome her drug dependency. “… without Scientology, I would be dead. So, I can personally highly recommend it,” the actress admits. Alley is also known for making generous, multi-million-dollar contributions to the church.

Related: Celebrity Families Talk About the Importance of Church for Their Families

6. Gladys Knight (Mormon) – Gladys Knight has been a Mormon for 20 years. The singer uses her powerful voice to evangelize for The Church of Jesus Christ of Latter-day Saints. Knight has been traveling around the country for the past 12 years with the Saints Unified Voices Choir, a group she created and directs, sharing the Gospel in song. The performer said that she has always been “a child of God” and that her journey into the Mormon faith began with her children, who became members before she did. Some reactions she got in the African-American community were: “Ooh! She done sold out! …I heard this was a cult, I heard this church didn’t like people of color…” Knight started her own journey to find out what LDS was all about in 1997, liked what she saw, and then joined the church, along with her husband, William McDowell.

7. Candace Cameron-Bure (Christian) – Just like her older brother Kirk Cameron, Candace Cameron-Bure is very vocal about her Christian faith. When speaking about faith and morality on Pivot’s “TakePart Live,” with co-host Meghan McCain, the Fuller House actress had this to say, “I think faith is the basis of morality. We could set our own standard, but…who’s to say your standard is right or his standard is right? That’ why it always comes back to the foundation. For me, it’s the Word of God, because it’s God, it’s not Candace’s opinion, it’s not your opinion and what you think is best, it’s about what God says and I think that faith has everything to do with morality… My concern is when we die, it’s eternity that’s at stake.”

Studies have shown that pornography can have devastating effects on people's lives, leading to infidelity, lewd behavior, sexual exploitation, … END_OF_DOCUMENT_TOKEN_TO_BE_REPLACED

According to Business Insider, podcasts have been surging in popularity over the last few years. Consumers are continuing to partake in this digital … END_OF_DOCUMENT_TOKEN_TO_BE_REPLACED