Although October is National Domestic Violence Awareness Month we thought we’d shed light on this very sensitive matter, and highlight some celebrity moms who’ve survived domestic violence from a partner. 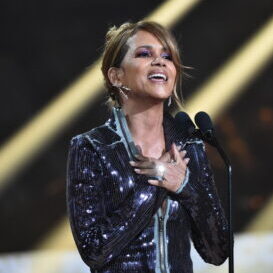 1. Halle Berry – At the Mayors Fund Benefit In New York City, the Academy Award-winning actress said she witnessed her father being violent toward her mother when she was young. Berry went on to share how her experience with domestic violence as a kid affected her as an adult.  “I devalued myself and thought I wasn’t worth it. I chose partners that mimicked my father. It was only when I was in an abusive relationship and blood squirted on the ceiling of my apartment and I lost 80% of my hearing in my ear that I realized, I have to break the cycle.”

2. Sherri Shepherd – In the early nineties, before Shepherd rose to fame, she fell victim to domestic violence and revealed her past to Precious magazine. “I was in a very physically abusive relationship. I was sleeping with a lot of guys and had more abortions than I would like to count…I had very low self-esteem and just wanted to die. I felt if someone killed me, it wouldn’t even make a difference. But God showed me that it would make a difference.”

3. Pamela Anderson – The former Baywatch star opened up about her painful past at her foundation, “The Pamela Anderson Foundation” earlier this year.  “My first boyfriend in grade nine decided it would be funny to gang rape me (with six of his friends),” she said. “Needless to say I had a hard time trusting humans — I just wanted off this earth.”  Sadly, later in life, she also suffered abuse from her ex-husband, Motley Crue drummer, Tommy Lee, who was incarcerated for his actions.

4.  Tamar Braxton – Tamar spoke to a crowd of women about her experience with abuse with a past relationship.  She said her healing process is what led her to her husband Vince Herbert.

5. Evelyn Lozada – The Basketball Wives star had recently married former NFL player, Chad Johnson, when a heated argument, over a receipt for condoms she had found in their car, resulted in Johnson head-butting her so hard that a bloody gash was left on her forehead, requiring six stitches.  He was later arrested, and Lozada filed for divorce three days later.

6. Tina Turner – Tina Turner was married to Ike Turner for fourteen years and suffered tremendous abuse at the hands of her former, now deceased, husband.  Turner’s account on her life with Ike was documented in the autobiography, I, Tina, released in 1986, and then two years later in the film, What’s Love Got to Do.

8. Brooke Mueller – In 2009, Charlie Sheen was arrested for felony second-degree assault, felony menacing and misdemeanor criminal mischief after reportedly trying to choke then-wife, Brooke Mueller.  Mueller also alleged that Sheen held a knife to her throat, and threatened to murder her.

9. Madonna – In 1988 reports claim Madonna was assaulted by then-husband Sean Pean. Reportedly, the Oscar-winning star tied Madonna up for hours and verbally, mentally and sexually abused her.  During this ordeal, he left to get alcohol came back and continued the abuse. The singer managed to escape, after telling him that she had to go to the bathroom.  She called the police and Penn was later arrested.  Madonna decided to drop the charges against him.

10. Robin Givens – When the actress was married to former boxer, Mike Tyson, she admitted that she suffered abuse.  After the Janay Rice incident, Givens penned an open letter about why she stayed in an abusive relationship.  “People ask why I didn’t leave after the first time he hit me.  But you feel such inner turmoil and confusion.  You want it to be only one time…,” Givens shared.

11. Michel’le – In an interview with Wendy Williams the R & B singer admitted that she had plastic surgery as a result of the abuse she constantly endured from rapper/producer, Dr. Dre, while they were together. She revealed that Dr. Dre broke her nose and gave her three black eyes. She later went on to talk about her next relationship with Suge Knight, who she felt restored her self-esteem and helped her believe that she didn’t deserve to be beaten for the sake of love.

12. Stacey Dash – The actress and TV personality claimed that all three of her ex-husband’s abused her. She filed a restraining order against her last husband, Emmanuel Xuereb, and said that he regularly beat her on the face, head and body during their marriage, but she was too afraid to report it to the police.  According to the report, he once pinned her to the bed and claimed he was going to give her “the worst night of her life.”

13. Nigella Lawson – Celebrity chef, Nigella Lawson, was grabbed around her throat, in public, by her husband, at the time, Charles Saatchi, and the violence was photographed by the paparazzi.  Lawson left the relationship shortly thereafter leading to an acrimonious divorce battle.

14. Meredith Vieira – The TV personality revealed that she was in an abusive relationship as a young adult.  She explained why she stayed. “Because every time we would have a fight he would then start crying and say, ‘I promise I won’t do it again’ and I would feel like maybe I contributed, somehow, to this… I continued to stay in that relationship until I was offered a job in another state and that’s where I felt I had the ability to get away.”

15. Iyanla Vanzant – Celebrity coach Iyanla Vanzant, revealed that she was a victim of domestic violence and left with her kids, “…willing to lose everything to gain it all.”

If you or anyone you know is suffering from domestic violence please contact The National Domestic Violence Hotline.