The moments we create with our children will last throughout their lives. These ten celebrity families are building memories with their kids by making church a meaningful tradition. 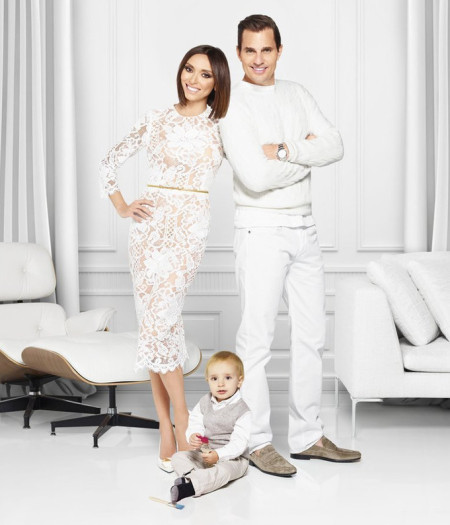 1. Giuliana and Bill Rancic – Rancic has gone through her share of trials with not only trying to conceive a child, but with her breast cancer battle. In 2012 she spoke to PEOPLE, “We go to church every Sunday. And we did before, but it never meant as a much as it does now. We prayed on our own, but now we prayed together and you’ll never know how much that means until you do it. Bill and I have changed our lives in that one way.”

2. Candace Cameron-Bure and Valeri Bure – Cameron-Bure opened up to Just Mommies several years ago about her Christian beliefs. “We go to church on Sundays, but it is not just a weekly thing. We read our bible daily and do a daily devotional every morning before school. …We talk about God in most of our conversations. So whether it is a learning situation, if it something they are dealing with at school or with friends … when I parent them, it is all from a biblical perspective. So many times I will say, ‘What does God say about this?’ So we will look at selfishness, or greed, or friendship, or when someone hurts you, and we will see how we respond to that biblically. It is easily incorporated into our lives because where I go for a parenting guide is biblical teachings.”

3. Ali Landry and Alejandro Monteverde – When Ali Landry wrote a blog post for People Magazine she said that if it’s a Sunday, church is a must for her family. “Luckily, our church has services both day and night so if there’s something we want to do in the morning, we can end our day together at church or vice versa,” Landry wrote. When the actress and model spoke with Tinseltown Mom she also shared a little about her Sunday tradition. “For us every Sunday, it’s our family day. We go to church; we go to brunch and we always plan a really great adventure, just the family.”

4. Reese Witherspoon and Jim Toth – Witherspoon and family are regularly seen around the Los Angeles area attending church services. In a 2009 interview with People Magazine, the actress said that she and her family set the table every night to enjoy dinner as a family and attend church services together. She said that she hopes to instill in her kids the “real sense of community” that is present in the south. “[Church] takes you out of your personal experience and universalizes it. You understand that whatever you’re dealing with, someone in that room has either dealt with the same thing or will in the future. We are all struggling to figure out what life is about,” says Reese, adding that “we are all just looking for answers.”

5. Matthew and Camila McConaughey – When McConaughey spoke with GQ Magazine he said that he and his family attend a non-denominational church in Texas. “It’s based in the faith that Jesus is the son of God, that he died for our sins, but many different denominations come in… As soon as we had children, I was like, ‘You know what? That was important to my childhood.’ Even if it was just for the ritual of giving an hour and a half on Sunday to yourself, to pray and to think about others, even if you’re tired or whatever. I noticed how much I missed it and needed it. It’s a time for me to take inventory of my last week, to look at what’s in the future and say my thank-you’s and think about what I can work on to do better.”

6. Mark and Rhea Wahlberg – In a 2013 interview with Parade Magazine Mark Wahlberg said his faith was the most important part of his life. The actor, who’s a devout Roman Catholic, doesn’t try to push it on anybody, but he also doesn’t try to hide it. “I’ll go to church at 7:30 and everybody will be eating breakfast when I come home. Then we’ll go to church again at 10:30, if things aren’t too hectic. Or if one of the kids has a game we’ll watch them play. It’s a nice family day.”

7. Nicole Kidman and Keith Urban – When Nicole Kidman was featured on Vanity Fair in 2019, she revealed her strong belief in God and said the Kidman-Urbans go to church as a family. “That’s how we are raising our children. Keith has his own beliefs, but he comes, too. I had a very Catholic grandmother, and I was raised praying, so that had massive impact…”

8. Angela Bassett and Courtney B. Vance – Both Bassett and Vance are vocal about their Christian faith and in 2011, Vance even became a licensed minister in the Church of God in Christ denomination. When Precious Times Mag asked how Bassett is prepping her twins for the world the actress gave this reply. “… (at) around eighteen months we started praying with them the Lord’s prayer, at two-years-old they could repeat the prayer. At three-years-old we started sharing and asking them what they are ‘thankful and grateful for’; at four my husband started Bible study every night of which he continues. We see the Word dropping in their spirits and they pray every night and we see how they handle situations. We live in a neighborhood that is not that diverse but attend a Black church and see how that has influenced their faith.”

9. Patricia and David Heaton – When Everybody Loves Raymond star Patricia Heaton shared her secret to success to Guideposts.org she revealed that her Christian upbringing was key for her, something she and her husband also teach their four sons. “I try to instill in them that same faith I had as a child. David and I take them to church every Sunday, and we always say our prayers before bed. The boys like to incorporate prayers for family and friends and whatever’s happening that week, things like ‘Lord, let Nana have a safe trip home tonight,’ or ‘Please help my younger brother do well on his test this week.’ It’s all very sweet.”

10. Denzel and Pauletta Washington – The Washingtons are very devoted to regular church attendance. “I read from the Bible every day, and I read my Daily Word,” Denzel Washington revealed to GQ Magazine in 2012. He also shared a memorable spiritual experience he had 30 years ago, at the church he still attends. “The minister was preaching, ‘Just let it go.’ I said, ‘I’m going to go with it.’ And I had this tremendous physical and spiritual experience. It did frighten me. I was slobbering, crying, sweating. My cheeks blew up. I was purging. It was too intense. It almost drove me away. I called my mother, and she said I was being filled with the Holy Spirit. I was like, ‘Does that mean I can never have wine again?'”