Have you ever wondered what your favorite celebrity was doing before making it big? Most Hollywood stars aren’t born rich and famous. In fact, pre-fame, a lot of celebs were struggling to get by, hustling for that big break, or working an odd job to help pay the bills, like these famous moms. 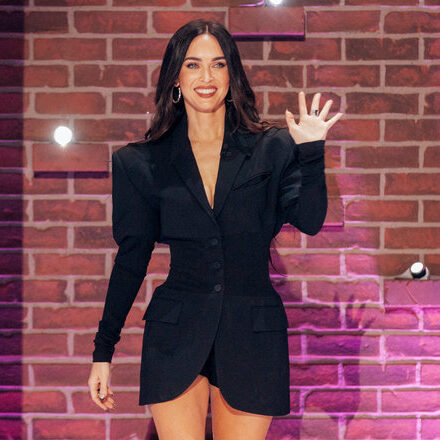 1. Megan Fox – Megan Fox worked at a smoothie bar in Florida when she was 15. Although Fox mostly worked behind the register, she said, “Once a week, usually on Fridays, someone had to dress up as a piece of fruit and go and stand out by the highway. I was a banana, a giant banana,” she shared while on The Ellen DeGeneres Show.

2. Whoopi Goldberg – Whoopi Goldberg had a couple of odd jobs before finding fame. After dropping out of high school, she was a phone sex operator, working from home at night. Later, she became a morgue Beautician, honing in on her trained cosmetology skills. “I did people’s make-up. Dead people’s, actually… I was good at that too,” the TV host told The Telegraph in 2009.

3. Nicole Kidman – In 1984, Oscar winner Nicole Kidman worked as a massage therapist at the age of 17, to help support her mom, who was diagnosed with breast cancer.

4. Rene Russo – To help her single mother, Rene Russo dropped out of high school and began taking a variety of part-time jobs including working in an eyeglass factory, and as a movie cashier.

Related: Celebrity Moms Who Dropped Out of High School

5. Demi Moore – Demi Moore worked as a debt collection agent before signing with the Elite Modeling Agency and heading to Europe to work as a pin-up girl. She later took up acting after reading scripts with a young German neighbor and aspiring actress named Nastassja Kinski.

6. Cindy Crawford – Before landing one of the most glamorous jobs in the world Cindy Crawford made a living as a corn-shucker at a local fair. She was a college freshman making $4 per hour when a photographer discovered the beauty.

7. Victoria Beckham – Before Victoria Beckham found success with the Spice Girls and as a fashion designer, she played a sperm on roller skates for a BBC sex-education television show called Body Matters.

8. Elizabeth Banks – Elizabeth Banks entered the job market as an errand girl for her local Catholic youth center. “I ran the after-school game room and then on Saturday mornings I ran the front desk where I did memberships… We had a basketball league, I handed out coffee to all the parents, I got lunch for the coaches,” Banks revealed. One thing the actress learned from her work experience, “Every job should be about customer service.”

9. Geena Davis – “Yes, I was a live mannequin.” Geena Davis shared with NPR in 2014 when talking about her job at an Ann Taylor clothing store where she sold merchandise. She eventually was hired to be in the window on the weekends and act like a mannequin.

10. Gwen Stefani – Gwen Stefani answered her fans burning questions and revealed to Wired in 2019: “My first job was… I was a swim instructor, lifeguard at a pool… my second job… was at a Dairy Queen.”

11. Meghan Markle – Before her acting took off, Meghan Markle told Glamour magazine about a unique job she had, “When I was auditioning, at the onset, instead of waiting tables, I did calligraphy.”

12. Beyoncé – Although maybe not an official job, because of her age, Beyoncé told Essence magazine how she made money from 6-9 years old. The singer and actress worked in her mom’s hair salon and “I helped sweep hair off the floor for tips to pay for my season pass to Six Flags…”

13. Eva Mendes – Inside the Glendale Galleria Mall in Southern California, Eva Mendes worked at the popular food chain Hot Dog on a Stick.

14. Helen Mirren – Oscar-winning actress, Helen Mirren worked at an amusement park when she was young and her job was to shout incomprehensible words to people, hoping they would stop so she could convince them to try out the fairground.

15. Taraji P. Henson – Taraji P. Henson said she put herself through college and held several jobs before her acting career took off including a job as a singing-dancing waitress on a small dinner cruise called the Spirit of Washington.

16. Michelle Pfeiffer – Michelle Pfeiffer was a checkout girl at a Vons Supermarket. In a 2021 interview with The New Yorker she said, “That was a good job, actually. It was a well-paying job. I just wasn’t happy with what I was doing.”

17. Mariah Carey – Mariah Carey told Interview magazine in 2016 that her first job was working at a pet shop.

18. Kristen Wiig – Kristen Wiig had several odd jobs early on in her career. She was a caterer, a waiter, the lady who gave out peach samples at a farmers’ market, and she even did floral design.

Being a mom is a wonderful, joyous and indescribable feeling.  And, when that connection can be shared with a loved one it makes the … END_OF_DOCUMENT_TOKEN_TO_BE_REPLACED

According to Gallup.com about half of all start-up companies fail within the first five years. It doesn't matter if you're an A-list celebrity or … END_OF_DOCUMENT_TOKEN_TO_BE_REPLACED