Expectant mom Zoe Saldana was featured on E!’s Untold with Maria Menounos and spilled the details about her pregnancy so far.

“You need to trust that there are people out there that are like you, that they will remember this, that they will honor it, that they will call you back. Motherhood is part of life so lets accommodate for it,” the pregnant actress said when talking about being pregnant while working.

Saldana and her artist hubby, Marco Perego, are expecting twins any day now.  The actress’s pregnancy was revealed in July, so hopefully we’ll be making a birth announcement soon.  She told E! that her children will be bilingual as Saldana and her husband plan to speak both Spanish and English around their children.

Check out a few other things the 36-year-old dished on. 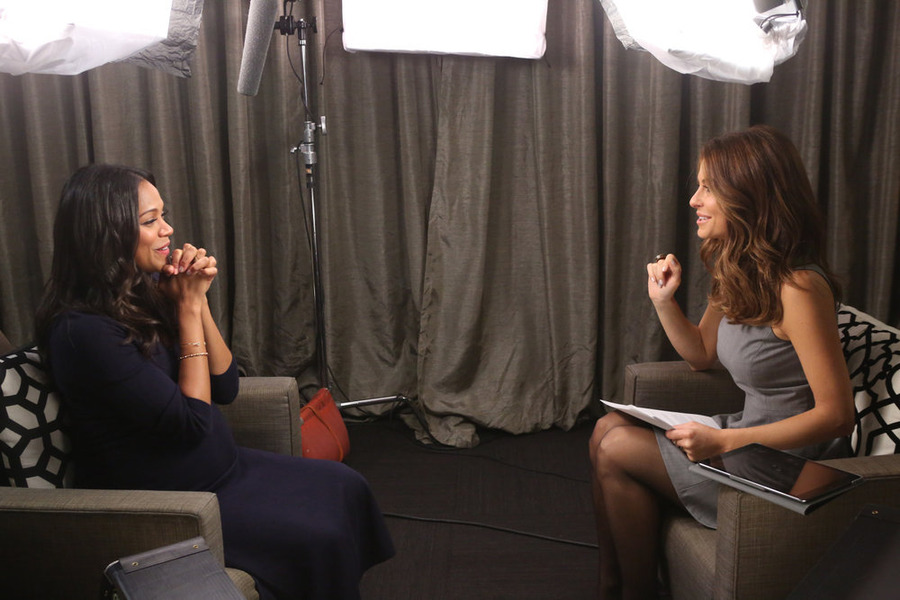 A lot of moms can relate to having baby-brain when it comes to that memory bank, but Saldana also admitted to having pregnancy-brain. “You forget a lot of things. Like, my husband’s name is Marco, and there have been a couple of times that I’ve called him Michael. Pregnancy brain, it’s completely…. You’re spastic. I have like Dori-brain from Nemo. I reset like every 3 seconds.”

What pregnant woman doesn’t like to giggle about all those odd food cravings? “You find yourself driving around bakeries, over and over… Ice cream shops, drive-throughs. You’re like, ‘what am I doing?’… The star told Menounos that when she becomes pregnant she’ll be “eating weird things” like cookies with salami. “You’ll eat mountains of it,” she laughed.

The Guardians of the Galaxy star also revealed how she hopes to combat gender inequality in film. “We have to fight harder; you have to be better; you can’t rest… ” With thinking like that it sounds like Saldana’s already got the motherhood thing down.

Studies have shown that pornography can have devastating effects on people's lives, leading to infidelity, lewd behavior, sexual exploitation, … END_OF_DOCUMENT_TOKEN_TO_BE_REPLACED

According to Business Insider, podcasts have been surging in popularity over the last few years. Consumers are continuing to partake in this digital … END_OF_DOCUMENT_TOKEN_TO_BE_REPLACED