Can you imagine your teenage daughter marrying right after high school? How about your baby walking down the aisle before graduating 12th grade? These celebrity moms married while still in their teens and some even before getting their high school diploma. 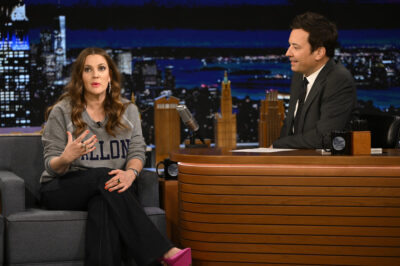 1. Drew Barrymore – In 1991, at sweet 16, Drew Barrymore became engaged to Leland Hayward, grandson and namesake of Hollywood producer Leland Hayward. The engagement was called off a few months later, then Barrymore got engaged to and lived with musician/actor Jamie Walters at 17. Later, the actress married her first husband, Welsh bartender turned LA bar owner Jeremy Thomas, at the age of 19 in 1994. She filed for divorce from him less than two months later.

2. Olivia Wilde – In 2002, when she was 19, Olivia Wilde married Tao Ruspoli, an Italian filmmaker and musician, at a ceremony in Washington, Virginia. She later said the marriage occurred in an abandoned school bus because it was the only place where they could be completely alone, as the marriage was a secret at the time. Wilde filed for divorce in Los Angeles County Superior Court on March 3, 2011, citing “irreconcilable differences.”

3. Kim Kardashian – In 2000, 19-year-old Kim Kardashian eloped with music producer Damon Thomas. Thomas filed for divorce in 2003, though Kardashian later credited their separation to physical and emotional abuse on his part.

4. Melanie Griffith – When she was only 14, Melanie Griffith started dating her mother’s 22-year-old costar in the The Harrad Experiment, Don Johnson.  Griffith was an extra in the film. They married in 1976, when she was 18, divorced after six months, then, in 1989, they got back together, got pregnant, and married for a second time, until they divorced in 1996.

5. Sofía Vergara – Sofía Vergara was married at the age of 18 to her high-school sweetheart, Joe Gonzalez. She gave birth to their son Manolo in September 1992. They divorced in 1993

6. Kyle Richards – In 1988, at the age of 18, Real Housewives of Beverly Hills star, Kyle Richards married Guraish Aldjufrie while she was pregnant with their daughter Farrah. They separated in 1990 and divorced two years later.

7. Solange Knowles – Solange Knowles married her high-school sweetheart, Daniel Smith in February 2004 when she was 17 and he was 19. Eight months later Knowles gave birth to their son, Daniel Julez Smith, Jr. Knowles called her son the greatest unplanned blessing. In October 2007, Knowles and Smith divorced.

Related: Celebrities Who Had Babies As Teens

8. Demi Moore – On February 8, 1980, Demi Moore married singer Freddy Moore, 12 years her senior, when she was 17. During their marriage, Demi began using Freddy’s surname as her stage name. They divorced five years later.

9. Milla Jovovich – In 1992, at the age of 16, Milla Jovovich married her Dazed and Confused costar and on-screen boyfriend Shawn Andrews, who was 21. The marriage was annulled by her mother two months later.

10. Loretta Lynn – In 1948, at the age of 14, Loretta Lynn married 21-year-old Oliver Vanetta Lynn, after knowing each other for only a month. A year later the couple left Kentucky and moved to the logging community of Custer, Washington while Lynn was seven months pregnant with the first of their six children. They stayed together for almost 50 years until his death in 1996.