With so many new Television shows posing under the moniker, “must-see-TV,” it’s difficult to know which ones to ignore and which ones to add to your, ever-competitive, to-watch-list. And, let’s face it, for a busy mom to commit her precious time to another show it has to be entertaining from inception. USA’s, Playing House, makes the cut. 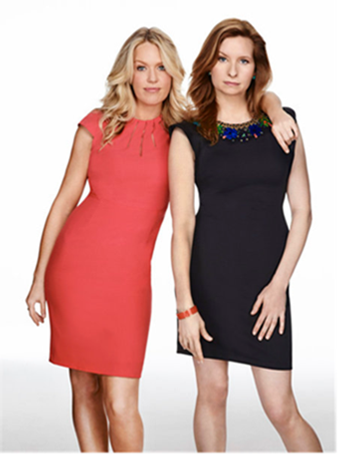 In the pilot episode we meet Emma (Jessica St. Clair), a single, career woman living an anxiety-filled, high-paced corporate life in Shanghai; now, juxtapose her life with Maggie’s (Lennon Parham), the 8-month pregnant best friend, who still lives in the small Connecticut town in which the BFF’s were raised. Emma comes home for Maggie’s baby shower and that’s when the fun gets underway.  Check out a sneak peek below.

At the baby bash, Maggie’s guests witness a bombshell when her husband’s philandering ways are put on display. The mom-to-be gives him another chance, but, as is often the case, it’s hard for a dog not to behave like a dog, so they inevitably part ways. Emma, being the bestie that she is, decides to quit her overseas job, and move in with Maggie to help her raise the baby, which is where the true heart of the show lies.

In this mom’s opinion, Playing House delivers on the friendship and the funny.  The comedic timing and interaction between these real-life buddies reveal a chemistry that cannot be ignored. The pacing is good; the writing is crisp, and the laughs are just enough to make you return for a second sampling. It’ll be interesting to see how the show develops after the stork arrives, but with the added element of a bouncing bundle of giggles anything’s bound to happen.

Check Out Our Exclusive, & Funny, Clip of St. Clair & Parham’s Take on Parenthood!

Studies have shown that pornography can have devastating effects on people's lives, leading to infidelity, lewd behavior, sexual exploitation, … END_OF_DOCUMENT_TOKEN_TO_BE_REPLACED

According to Business Insider, podcasts have been surging in popularity over the last few years. Consumers are continuing to partake in this digital … END_OF_DOCUMENT_TOKEN_TO_BE_REPLACED