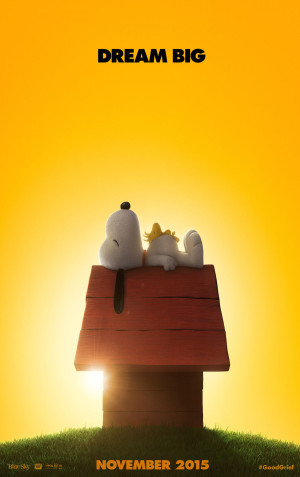 Charlie Brown, Snoopy, Lucy, Linus and the rest of the “Peanuts” gang are gearing up for their big-screen debut in November and they’re making their grand entrance in state of the art 3D animation! Charlie Brown, the world’s most beloved underdog, embarks upon an epic and heroic quest, while his best pal, the lovable beagle Snoopy goes up against his nemesis the Red Baron. Meanwhile, Charlie Brown tries to win the affection of the Little Red-Haired Girl, who just moved to the neighborhood. Taken from the imagination of one of the mot influential cartoonists of all time, Charles M. Schulz, The Peanuts Movie will encourage your entire household to Dream Big.

We were thrilled and grateful to participate in a special media day at the beautiful Charles M. Schulz Museum in Santa Rosa, CA and even more excited that we were able to chat with some of the filmmakers, writer/producer, Craig Schulz (Charles’ son); director, Steve Martino, and Jean Schulz (Charles’ widow) who, along with the rest of the family, helped keep the heart of Charles M. Schulz’s vision alive throughout the film. “Plainly it had to be written by the family because even people who loved the strip all want to distort it in their own image,” Jean Schulz shares with Tinseltown Mom.

This highly anticipated film includes four generations: the mastermind creator, Charles M. Schulz, his son Craig, his grandson Bryan Schulz, who was also a writer/producer on the film and Charles’ great-grandson, Micah, who voiced one of the characters. Many of us grew up adoring Peanuts, and it’s hard to believe that it’s been 35 years since the last movie was made and that this will be the film’s big-screen debut. “The last movie we did was 1980, Bon Voyage, Charlie Brown (and Don’t Come Back!!)... The reason we brought it back was it had been about twelve or thirteen years since my dad had passed on and the new generation was coming up, no one was reading newspapers anymore… so we had to find some way to reach new audiences and bring them back to Peanuts and hopefully the movie will do that. You’ll watch the movie and wonder about Charlie Brown and Snoopy and wonder who that dirty Pig-Pen kid is and if you go back and read the comic strip you’ll understand who Pig-Pen is and Violet and Patty. That’s what our hope is; that it’ll drive you back to the books and not the other way around,” Craig explains. 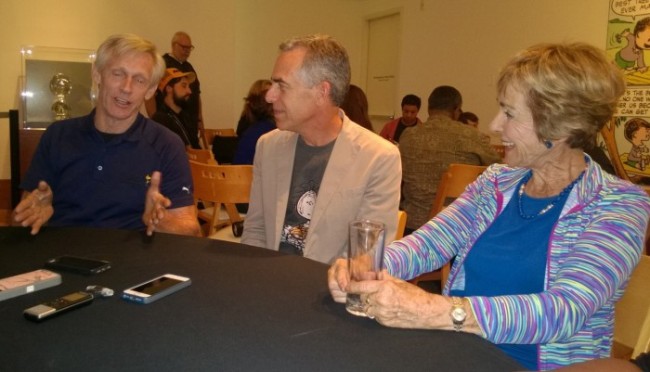 Knowing what an important franchise the Peanuts strip was, and still is, we also wondered how the family came up with the crucial players. “…I got with my son, who just graduated from film school and sold a couple of movies… and Cornelius Uliano, his writing partner, and the three of us sat down and crafted the film and then we decided who can make it and we went to Blue Sky and Steve (Martino) and said ‘can you make our movie?’ and we built our team around that and now here we are,” Craig says.

The movie will commemorate the 65th anniversary of the comic strip and the film’s director, Steve Martino, who’s known for Ice Age: Continental Drift and Dr. Seuss’ Horton Hears a Who!, made no secret about his excitement to be part of this historical project. “What an opportunity. In animation the one thing that I always look for, you look for great characters. Whether you’re trying to create that originally or in some other fashion, great characters drive everything and these are the best characters I think ever created. I’m a Peanuts fan, but an opportunity to work on this film with Charlie Brown and Snoopy… I love these characters…”

The characters, as well as the authenticity of the original comic strip, are genuine to the brilliance of Charles M. Schulz, however there were some enhancements that will make the movie even more appealing to wider audiences, like the “intentional and important” computerized 3D animation that allows for a richer feel and more believable world.

One thing’s for certain, whatever changes have come about since the original 1950 comic strip was born, the family was deliberate in the way this film was created and perceived, which is a beautiful tribute to the late Charles M. Schulz. “…we stayed true to his legacy,” Craig continues. “It’s an honor to not only work with his property but to honor him for the work that he’s done for 50 years. To me it was a privilege to do that and I’m glad that the family supported me. That was exciting.”

The Peanuts Movie is scheduled to be released on November 6, 2015.

Studies have shown that pornography can have devastating effects on people's lives, leading to infidelity, lewd behavior, sexual exploitation, … END_OF_DOCUMENT_TOKEN_TO_BE_REPLACED

According to Business Insider, podcasts have been surging in popularity over the last few years. Consumers are continuing to partake in this digital … END_OF_DOCUMENT_TOKEN_TO_BE_REPLACED