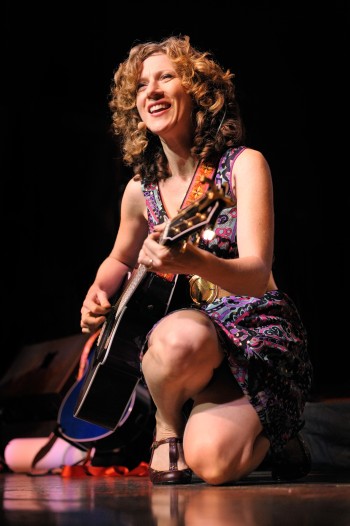 Laurie Berkner may not be a familiar face in some households, but if you’re a parent and have small children, and your little ones watch any type of kid’s programming then you’ll recognize the popular musician in an instant.  In fact, People Magazine once hailed her the Queen of Children’s Music.

The New Yorker began her musical career early in life, performing in choirs, bands, and musical theater. After graduation from Rutgers University, she was a rock musician by night and a kid’s birthday party performer by day, even entertaining some high-profile fans, like Madonna’s daughter and Sting’s children. Berkner’s epiphany moment came during one of those many birthday parties and so, her venture into kid’s music began.

The kindie rock singer has released nine records, four DVD’s, and five books.  She’s also writing music for Off-Broadway shows; and, she co-created a short form animated series, Sing it, Laurie! played on the popular pre-school network, Sprout.  This is in addition to playing to sold-out venues all over the country, while raising a daughter.  And, we have the pleasure of speaking with the best-selling children’s recording artist, herself, Mrs. Laurie Berkner.

So, I know a lot of people want to know what your 9-year-old daughter, Lucy, thinks about your music?  She likes it, but told me a couple of years ago that she feels she’s starting to get a little old for it, so, I’ve had her doing different projects lately.  Last year, I wrote music for an Off-Broadway musical, Wanda’s Monster, and this year I’ll be writing a new one, and Lucy’s been really interested in wanting to help me write the songs.  The last three years that’s been her focus.

So, she has musical aspirations too?  Not necessarily…she plays drums and piano, and she loves making movies… and she’s a good singer.  She actually just sang a duet with me on my lullaby album that we just released. [Lucy is on the third track on the Lullabies CD: I Gave My Love a Cherry (The Riddle Song)]. She’s always just been around when I’m doing these things, so she’s like ‘if you want to know what a kid would want in a song, then you should be talking to me.’ (laughs) 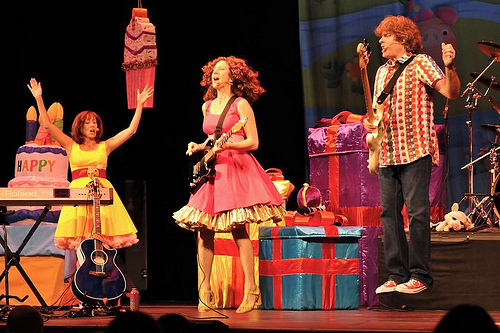 Earlier in your career you were in an all-girl band.  How did you make the transition into children’s music? Well, it really was happening at the same time.  A year out of college I got a job as a music specialist for pre-schoolers.  So, I had been in day care settings, pre-school settings, Mommy & Me kinds of classes teaching and working with parents and young kids and doing music with them for some years, but along the way I actually started writing some of the songs because I found that it was much easier to write a song that helped the kids do what I needed them to do.

And, how did your career progress from there?  So, I had all these songs, which is why I ended up doing the birthday parties, because when I started recording them people would share them with their friends, or they’d be given out as party favors.  In the meantime, at night, I’d be out with my cover band until 4am playing to all these drunk people and I’d get home, sleep for a couple of hours then go do a children’s party. One morning I was not feeling well, and the night before drunk people were screaming at me, but, I did a birthday party with a bunch of kids and parents who were so… happy to be there, and they were asking me to do songs that I’ve actually written, and I thought ‘this is what I want to do.  I want to be here.’  So, eventually I let go of the gigging at night and pursued kid’s music.

What an inspiring realization… What do you consider your career breakthrough moment?  I had a few albums out already, but wanted to know how to get them into stores. I had been trying to get distribution, but was having a hard time. There was a mom who had my second album, Buzz Buzz, who worked at the Today Show, and she pitched me to her executive producers to come on the show.  Eventually I got to perform on the Today Show, and when I did that 15 minute slot in the early 2000’s all three of my CD’s became top 10 sellers on Amazon.  So, an exclusive distributor for Barnes and Noble called me at home while I was in my bathrobe, running my record label, Two Tomatoes Records, in my one-bedroom apartment. She said people were looking to buy my music in Barnes and Noble all over the country.  So, the following couple of months were insanity.  I had to hire all of my friends to start shipping from my apartment. That was a very powerful 15 minutes of my life.

So, things just went up from there.  Tell us how.  I got a call from Scholastic that same week saying they wanted to make books from my songs, so I made two books with them. Three-Four years later, I began performing my videos between shows on Noggin (now called Nick Jr.) and it was the Today Show experience times 10, or times 100…  I was pregnant when we filmed the initial video in 2004.

Laurie performing her video, Fast and Slow, between a program on Nick Jr.

This is a good segue. How was that transition into motherhood with your career already established?  It was really hard for me. And, it’s funny, people were like ‘oh you do kid’s music. This will be so perfect for you, having a child… Your job is so connected with kids and it’ll be awesome.’ But, the hard part was that everyone wanted you performing or out with their kids, at the same time that I wanted to be out with my daughter, having fun.  So, I had to figure out how to do shows, or film on the weekends when I wanted to be with Lucy.

How old was Lucy when you began filming Jack’s Big Music Show & how did you juggle the new gig with having a baby?  During the first season of Jack’s Big Music Show she was only 9-months-old.  So, I asked that I only film in New York, and that we spread out the filming of my videos so I only had to come in for one really long day, and I also needed to bring Lucy with me because I had to nurse her in between. My husband, Brian, was in the band in the first season so he helped with Lucy, and we had a babysitter when we had to be on set at the same time.

Why did your husband leave the band after the first season?  Brian left the band around 2006 to pursue his dream of becoming a therapist, and he went back to school to get his Ph.D. in Psychology. And, really we found that running the business together, being in the band together, raising a family together… we realized that we had nothing else to talk about (laughs).  So, it was good for our relationship too.

I can imagine.  How do you come up with these  great songs?  They’re so catchy?  Thanks. I feel very conscious of how much I listen to what kids say.  And, I feel like a lot of times I either could imagine that a kid would say the thing that I write about; or, I literally hear them say it and I think ‘great idea for a song’.  A lot of it is that, or just memories from when I was a kid, or sometimes I think about what would I have enjoyed when I was five. And, I really try to write from that point. 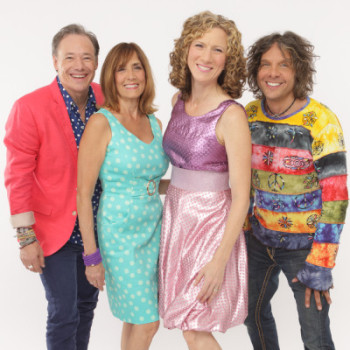 You’re a mother accomplishing your dreams in the entertainment industry and a lot of moms are trying to fulfill their own desires, but may be discouraged due to challenges along the way.  What advice would you offer?  For me, the first thing that came to mind was involving Lucy in what I was doing because it made it easier to find time to do it. I think if you allow your kids into what you’re doing, whether it’s your struggle or your joy then you’ll find more inspiration in what you’re pursuing. It’s also lovely to have that time with them but, don’t make it a chore.

That’s great advice.  So, with your busy schedule, how do you balance that with family?  Now that Lucy is past my target age group then she’s old enough that when I bring her to a show she knows that I need to go do my work, and she’ll participate when she’s there.  Like she’ll work at the tables; or if we have props then she’ll come onstage as one of the kids that throw beach balls, or she’ll even sing a song with me sometimes. It’s always been hard to find that balance but as they get older they need less of your time.  And, the times that I want to be at home and can’t be, can be very frustrating and difficult.

I know a lot of moms can relate to the challenge of finding balance.  What are your favorite mommy-time moments?  Oh, good question.  What is that?  Doing things for myself?? (laughs) I’ve been meditating in the morning.  I love to ride my bicycle.  I knit. I’m not even very good at it, but I enjoy it.  I never seem to find the time to do it. I also love being outside.

You’ve done so much in your career: nine album’s; three DVD’s; five children’s books; two mobile Apps, television appearances and concerts all over America. What’s next for you?  Working on this musical is what I’m in the midst of right now.  There will always be more CD’s.  And, I would love for the animated, “Sing It, Laurie!” videos to go to series, which I’m trying to work on making happen.  I like reading about food, cooking, nutrition… I would love to combine music and food. I enjoy doing things that keep my creativity going.

Laurie, thank you for taking time out of your busy day to do this interview.  Do you have any parting words?  I feel really happy about the new lullaby album. I’m very proud of it and want more parents to hear it and share it with their kids, and have it be a part of their lives.

To buy Laurie’s lullaby album or any of her other products visit Two Tomatoes Records.

Apple PodcastsGoogle PodcastsAndroidby EmailRSSMore Subscribe Options
“Life is very interesting... in the end, some of


Error: API requests are being delayed for this account. New posts will not be retrieved.

Rape is a tragedy no person should have to endure. And when the sexual assault results in conceiving a child overwhelming emotions arise out of difficult decisions that must be made. Sadly, even … END_OF_DOCUMENT_TOKEN_TO_BE_REPLACED

Laboring and delivering a baby without the intervention of pain medication can be a beautiful, natural, occurrence for mothers, but it also comes with … END_OF_DOCUMENT_TOKEN_TO_BE_REPLACED

When you think of prison celebrity may not be the first thing that pops to mind, however, the rich and famous make mistakes and commit crimes just … END_OF_DOCUMENT_TOKEN_TO_BE_REPLACED

It goes without saying that the standard of beauty continues to change and a woman's body is appealing in all shapes and sizes. These popular 1950's … END_OF_DOCUMENT_TOKEN_TO_BE_REPLACED

Since summer is fast approaching we're continuing our series of famous moms sporting swimsuits from the Golden Age of Hollywood up until now. Today, … END_OF_DOCUMENT_TOKEN_TO_BE_REPLACED