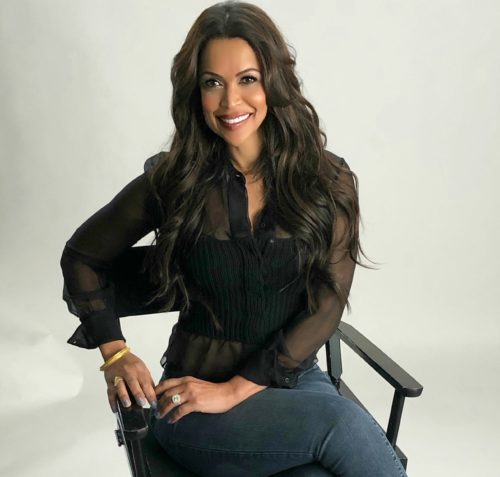 With over 20 years of film and television projects under her name, Tracey Edmonds’ work has brought joy and laughter to many households. Beginning with her most endearing project, Soul Food, which led to a hit show on Showtime, to a string of movies and TV shows, including the recent BET drama, Games People Play, audiences all over the world have fallen in love with her work. The multitalented CEO and president of Edmonds Entertainment also spent 3 years as a host on the syndicated television newsmagazine show Extra, earning a coveted Emmy, plus she’s inspiring people with her innovative lifestyle brand, AlRightNow.

Two subtitles added to Edmonds’ list of credits since we spoke in 2018, and ones that she’s acclimating her life to, are fiancée and empty nester. She and Pro Football Hall of Famer Deion Sanders became engaged earlier this year and both of her sons, Dylan and Brandon, whom she had with her ex-husband Kenneth “Babyface” Edmonds, are out of the house. “…I’m definitely in the process of learning to adjust to the empty nest syndrome,” she tells Tinseltown Mom. “…My youngest just started college this fall, and I’m honestly not yet used to him being gone. The good news is that he still likes to check in with me, so we still speak almost every day, but I miss seeing his face and popping my head in his room. The house is very quiet right now. On the positive side, it allows me to spend even more time with Deion and not feel like I’m neglecting anyone. So, it’s been wonderful for our relationship…”

Edmonds and Sanders have been together for eight years, dividing their time between Texas and California, as both have business commitments that keep them obligated to spend weekdays in their respective cities.  “…We just finished building our dream house out in the country part of Texas, in a little town called Canton which is about 50 minutes outside of Dallas. We have 200 lakefront acres out there in a ranch/farm-style setting with chickens, hogs, and fishing lakes so it’s been fun balancing the city life of LA with the slower country life of Canton. I’ve been spending 4 days a week in LA and 3 days a week in Texas during football season and then Deion reverses things and spends more time in LA after football season. The plan is to keep that schedule going for the next few years until we are officially ready to retire…” 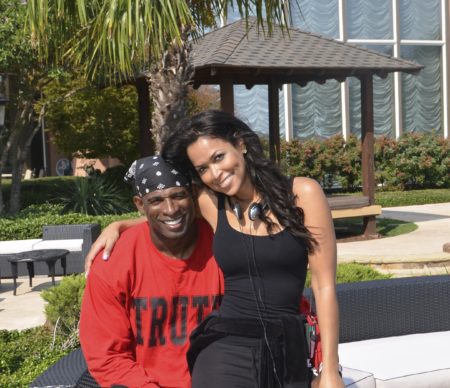 As for their impending nuptials, we do know that they’re eyeing a spring wedding, but Edmonds admits that they both need to slow down and actually start planning. “…The good news is that we also finally settled on Texas as a location. Right now, the plan is to do a lakefront wedding at our new ranch in Canton, Texas. I have this ‘Gatsby style’ vision in my head of what I want to do but I just need to start planning it all out. I want it to be fun for everyone…”

It goes without saying that dating as a single mother is challenging, which is why we elicited practical advice from Edmonds for single moms trying to navigate a relationship while ensuring quality focus is spent on the kids’ needs and emotions. “I would just say, don’t put so much pressure on yourself to be perfect. Know ahead of time that there is no such thing as the ‘perfect balance’ of motherhood and dating so don’t expect it. I’ve always put my kids’ needs first and then made sure that I had a relationship where my partner understood that. Deion was the perfect man/partner for me because he was also a single parent and put his kids’ needs at the forefront. Family values are so important to both of us and we believe in hands-on parenting. As a single mom, I think it’s important when you have children to date mature men who understand the importance of parenting and won’t be selfish about their needs.”

In addition to relationship balance, Edmonds maintains her physical and mental health and helps others do the same through her growing wellness website, AlRightNow. “…We have been getting flooded with requests from such a diverse group of followers who seem to really love the site and also want to be guest contributors. We were fortunate to collaborate with Betsy Chase, who directed the hit documentary, ‘What the Bleep Do We Know’ along with her partners Laura Mentze, and Laurie Ann Davis on a wonderful series ‘Radical Dating’ designed to help people over 40 find love. We truly believe that it’s never too late for love and our series is designed to help people open their hearts and minds to finding the right love connection. The series fits beautifully within the mission of the AlRightNow website, which is to share tools with everyone so they can live their best life. Our site shares health, wellness, career and relationship tools.” 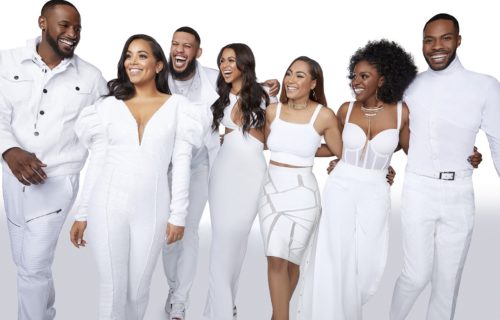 Edmonds is also an executive producer on BET’s drama Games People Play, a television series adaptation of the novel Games Divas Play, written by Angela Burt-Murray. “…Angela brought the book to me to adapt for television because I had adapted another one of her novels, The Vow, into a Lifetime movie called ‘With This Ring’ which starred Gabrielle Union, Regina Hall, Jill Scott and Eve. Our series, ‘Games People Play’ starring Lauren London and Sarunas Jackson takes you inside the high-stakes world of professional sports, where everyone plays to win. We were blessed to finish season one as BET’s #1 show and were just picked up for a season 2. We are very excited to continue on with more of the unexpected and juicy storytelling that viewers seemed to love.”

With living in a big city and being connected to high-profile men there are inherent similarities between Edmonds and the character of Vanessa King on the show. “…Without going too deep, let’s just say that in my younger days, I have been in relationships where all that glitters is not gold and, like the Vanessa character, have stayed longer than I should have and did things to protect my family,” Edmonds admits. So, what would the seasoned and successful Tracey Edmonds tell Vanessa King to motivate her along her difficult journey? “I would encourage her to be independent and to pursue her own dreams. I encourage all women to not lose sight of themselves in a relationship. It is important to maintain your self-esteem, your strength, and your independence… Be cautious about giving up your career for a man. I never stopped working even when I married, and I married young. Having my own career and maintaining my independence afforded me the strength and financial security to walk away from my marriage when it was no longer in my best interest to stay.”

Even with a wedding around the corner, it seems business as usual for the self-reliant bride-to-be. In addition to season 2 of Games People Play, the filmmaker is developing a new drama series called Invisible Life, based on the best-selling novel written by E. Lynn Harris. She’s also working on a suspense-thriller feature film starring Queen Latifah with a tentative shoot date of summer 2020.

For more on Tracey Edmonds visit Edmondsent.com, or catch the well-rounded mom at her lifestyle site AlRightNow.com.