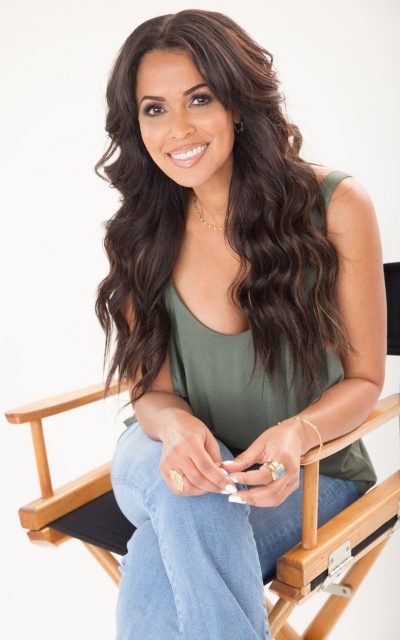 Tracey Edmonds has had a respectable film and television-producing career for over 20 years, from her most memorable project, Soul Food, which spawned a television show on Showtime, to a string of movies and TV shows, including the romantic comedies, Jumping the Broom and Good Luck Chuck. She’s the CEO of Edmonds Entertainment and spent 3 years as a host on the syndicated television newsmagazine show Extra. She also sits on the national board of directors for the Producers Guild of America. Now Edmonds is inspiring people with her innovative lifestyle brand.

We were thrilled to catch up with the multi-dimensional businesswoman and were curious to know what inspired her health and wellness website, AlRightNow. “We know that a majority of health and emotional issues are caused by lifestyle decisions,” Edmonds shares with Tinseltown Mom. “We are here to share tools with people that can help them make healthy lifestyle decisions to prevent disease and health issues and to live happy and balanced lives. I’ve always strived to live a ‘clean’ life. I learned the importance of diet, exercise, and positive thinking…living at an early age. I believe that these practices have afforded me a healthy, balanced, and happy life, and I want to share the same tools with others.”

Edmonds says the brand was designed to motivate her followers to find their inner strength to be able to thrive through thick and thin. “…We supply our audience with engaging articles and videos which provide actionable tools to help them attain radiant health, fitness, meaningful relationship and career success. We want our audience to attain balance in their lives so that they are ALRIGHT in every aspect of their lives.”

AlRightNow is rich in health-giving content that comes from a variety of sources. “…I’ve written over 60 articles and shot over 30 videos for the site which come from a testimonial space of me sharing information that I’ve learned from my own research and personal practice,” Edmonds continues. “We also have guest contributors, experts in natural health, diet, fitness, relationships, and motivational tools, who are sharing their expertise with our audience through the articles and videos that they contribute to the site.”

From a young age, the healthy mom has led an active lifestyle. She grew up as a dancer, studying ballet, tap and jazz. She was also a cheerleader and in the advance dance program in high school. Today, the fitness enthusiast remains in tip-top shape so we were excited to hear about her health and wellness secrets. “… I’ve always loved staying in shape and fitness routines that incorporate flexibility and balance. I did a lot of Pilates for about 20 years and switched over to Yoga a few years ago. My routine now is running on the treadmill for 20-30 minutes to get cardio in and then practicing yoga in the evening to ‘wind down’ and de-stress.”

In addition to Edmonds’ wholesome lifestyle, she is also a prolific producer, having worked on several projects over the years, but her most beloved venture is one that many households fell in love with. “I think my first movie, Soul Food, was my most passionate. I produced it when I was still in my 20s. It was my first project and a labor of love. It was truly a test of my intuition and instinct because I had zero experience in producing prior to that film. I worked on it purely from my gut and passion.” The talented filmmaker says stories that resonate best with her are ones that she would personally like to watch.  “…I love contemporary, empowering stories where the protagonist—even if she…he has flaws—has strong and positive values. I love stories that inspire and make an audience feel good. I believe that with great storytelling, you can achieve all of these goals, no matter if it’s a drama, comedy, or thriller.”

From an early age it seems Edmonds was destined for a Hollywood career, and even though she’s a psychobiology Stanford grad entertainment was clearly an underlying passion. “I always had a love for film growing up. I grew up watching a lot of Old Hollywood, classic movies. I loved Bette Davis, James Stewart, Cary Grant… as well as classic directors like Alfred Hitchcock and Frank Capra. When I was in elementary school, I used to put together renditions of TV shows for afterschool play. I would put together afterschool pretend plots of shows like Charlie’s Angels with plot lines and props. It was all make-believe fun back then, but I didn’t realize that I was acting as a ‘producer’ even as a kid.” As an adult, Edmonds found her break in the entertainment industry when she was in her early 20’s after marrying Kenneth “Babyface” Edmonds. “…I launched a music publishing company that segued into a record label, which led me to music supervise films and then ultimately produce films…” 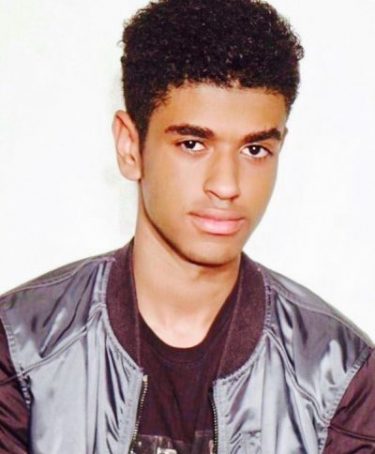 Although no longer married, Edmonds and Babyface have two handsome sons together, Brandon and Dylan, and the single mom admits that she tries to give them a grounded and normal life as much as possible, plus instill the value of family. “…I raised my kids the same way that my parents raised me and tried to keep them out of the ‘Hollywood craziness.’” Edmonds says that she was always very close to both of her parents growing up, and both of them were great communicators, as she believes that communication is key to parenting. She continues, “…As a single mom, I’ve always felt that it was so important to have honest and daily conversations about life with both of my boys. It’s just been the three of us inside my household, so they’ve grown up very close to me in every aspect of their lives. When their dad and I first split up and they were young, they spent quite a bit of time with me in my bedroom reading and watching movies. I had them watch a lot of documentaries when they were younger so they would learn about the rest of the world, what was going on in different countries, history, and even watch the news so they would understand what was going on in our own country. We also value travel a lot as a family. We have taken at least one international trip each year so they could see the world with me, and we’ve taken an annual trip up the coast of California with their grandparents so they’d learn the importance of family and have a sense of nostalgia.” 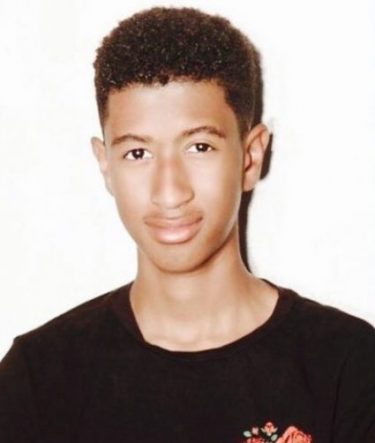 And like many moms trying to find work-life balance it’s difficult, plain and simple, no matter the profession. “It was challenging balancing a demanding career and being a single mom when my kids were younger. Their father and I split up when Brandon was 7 and Dylan was only 2. They grew up traveling with me a lot when I was on location filming. The blessing is that I was able to film during the summer quite a few times, so they were able to spend their summers in places like Vancouver, Nova Scotia, and Cleveland and get to know a different city, state, country… My parents would often travel with us and help me with the kids while I had to work. I would also take the kids with me to set so that they would understand what I did for a career. My parents both passed away a year ago, but prior to that they were always around the kids and provided me with a lot of support. I’ve also been blessed to have the same live-in nanny for the past 14 years who has also provided stability in our household with the cooking, etc.”

Having creative parents, it’s no wonder Edmonds’ sons have a passion for the arts. “My oldest, Brandon, is a music major at Loyola Marymount University. He’s probably the one most likely to go into the entertainment industry. Creatively, he is definitely half me and half his father. He is visually gifted with film. I raised him on all of the classic movies and had him watch the AFI Top 100 Films of all time beginning when he was in junior high school, so he has an appreciation for great films. Consequently, he took film classes in high school and college and had a gift for directing short films and music videos at a young age. His current job outside of school is working for my production company, Edmonds Entertainment, as a co-producer on a feature film project that we are filming this summer and co-producing a one-hour drama for TV. On another note, he is also a gifted pianist and guitar player and writes music. As a mom, I am so curious to see where his passion and talents will take him in life. My youngest, Dylan, is still in high school. Dylan is also a gifted pianist but has sports and entrepreneurial interests. He has a great business mind and loves basketball. He tells me that he’d love to be the GM of a sports team or own a team one day.”

Edmonds is not opposed to her kids pursuing a career in entertainment, but certainly gives them advice and guidance if taking that route. “… I told them that if they do, they need to be mentally prepared for a lot of rejection. People in the entertainment industry hear the word ‘no’ a lot, whether they are in front of or behind the camera. There is a lot of rejection, so you have to be thick-skinned.” 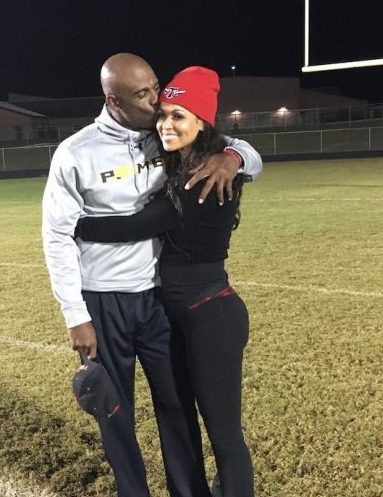 The multilayered-businesswoman seems to be well-rounded in all facets of her life, including love. She’s been in a relationship with Pro Football Hall of Famer Deion Sanders for seven years and offers some keys to her relationship success. “I think that trust, sharing the same values, support, and laughter are the key ingredients to our relationship. We have a lot of fun together as a couple, and I really trust him. He’s always had my back.”

Although the power couple live in different states they still make it work and remain close. “Being in a long-distance relationship can be geographically challenging at times because I do miss having Deion with me on a daily basis. I often wish that he were at home with me every night, but we have a very solid and satisfying relationship filled with love, fun, comfort, support, and trust. We try to see each other on the weekends as much as we can and try to never go longer than two weeks without seeing each other. We also talk on the phone several times a day and always at the beginning and end of the day.”

Edmonds has two kids and Sanders has five biological children, plus others that he’s raising, so her sage advice on making a blended family work is worth taking note of. “Take your time getting to know your partner’s kids and having your partner get to know your kids. There is a comfort curve on both sides. Both sets of kids will probably be cautious about getting to know each of the relationship partners because they have a comfort zone and love for their own biological parents. It’s important to respect that and not try to be too pushy. Allow the relationship with your partner’s kids time to grow. Once you have gained their trust, then grow your role in their lives. It’s wonderful to create organic opportunities for both sets of kids to spend time together and get to know each other, but don’t rush it. It all comes in time.”

It appears this accomplished mother has no impending plans of slowing down. The producer is working on a family road-trip thriller, End of the Road, that she’s developing for Lionsgate, plus a one-hour drama, Games People Play, that is in development for BET.”

For more information on Tracey Edmonds’ lifestyle brand visit her website at AlRightNow.com.