To many, cancer is a very scary word, and it can turn to terror when a person gets news from the doctor that they have the dreaded disease. These 21 brave women, all moms, have had to face the harsh reality with themselves, and their families, that cancer is now a reality in their lives. 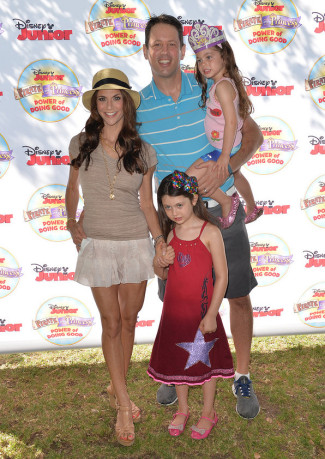 1. Samantha Harris – TV personality Samantha Harris had a “clear” mammogram from the doctors, however, 11 days later she found a suspicious lump, and had it checked out. It was breast cancer. She underwent a double mastectomy in May, but the married mom of two was told that the cancer spread to a lymph node, and she chose not to go through chemotherapy. She did reveal that she had a great support system in her little girls. “They were both really good about it. They were helpers, they brought me things, they checked on me—and we just continually assured them that, ‘mommy’s going to be in bed for a little bit, but then I’m going to be fine.'”

2. Suzanne Somers – In 2001, Somers announced she had breast cancer. She discovered it through a routine mammogram. She had a lumpectomy to remove the cancer followed by radiation therapy but decided to forego chemotherapy in favor of alternative treatment.

3. Michelle Monaghan – Michelle Monaghan had a chunk of her calf removed after a doctor determined that a mole on the back of her leg was cancerous. The actress told Health magazine that she was grateful to her husband who encouraged her to get her leg checked out.

4.  Rita Wilson – Rita Wilson underwent a double mastectomy and reconstructive surgery in 2015 after being diagnosed with breast cancer. She shared a post on her Instagram, saying,”Four years ago when I was diagnosed with breast cancer, I had so many different thoughts. You’re scared, anxious, you think about your own mortality. So I had a serious discussion with my husband that if anything happens, I want him to be super sad for a very long time 😊 and I’d also like a party, a celebration…”

5. Giuliana Rancic – The E! News personality was 36 years old when she found out she had breast cancer. She learned about the diagnosis through a mammogram she had at her doctor’s request before undergoing her third round of in vitro fertilization treatment. Following the news in 2011, she had a double lumpectomy as part of her breast cancer treatment but later decided to undergo a double mastectomy. Rancic told CBS News in 2013 about the incredible support her husband, Bill, had been, “I always say not everyone has that support system. I can’t even imagine having gone through breast cancer without having an incredible person by my side to help me through it.”

6. Valerie Harper – The Mary Tyler Moore actress was diagnosed with lung cancer in 2009. In March of 2013, the 75-year-old revealed that she had leptomeningeal carcinomatosis, a rare condition in which cancer cells spread into the meninges, the membranes surrounding the brain. Sadly, the doctors only gave her an average life expectancy of three months, however, it’s been more than a year and the star says she is responding well to treatment.

8. Joan Lunden – In June of 2014, the mom of seven revealed on Good Morning America that she had breast cancer. The journalist spoke candidly on GMA, “I heard those words that every woman fears and never wants to hear, ‘You have breast cancer.'” Lunden underwent a core biopsy that found an “aggressive” kind of cancer that will require chemotherapy, surgery and radiation, but thankfully, she is expected to make a full recovery. “I’ve got that journey ahead,” she said. “I’ve already started it. I’m already doing my chemo.”

10. Melissa Etheridge – In 2004, Etheridge was diagnosed with breast cancer and underwent chemotherapy. The rock singer/songwriter appeared on Dateline NBC to discuss her battle with cancer, and admitted to using medicinal marijuana while she was receiving chemotherapy, stating the drug improved her mood and appetite.

11. Sharon Osbourne – In 2002, Osbourne had surgery for colon cancer, specifying only that it was a treatable form and that she was due to have the procedure in the US. Later she revealed that it had spread to her lymph nodes and was more serious than originally thought. She survived the disease against a 33% survival prognosis. In August 2004, she founded the Sharon Osbourne Colon Cancer Program at Cedars Sinai Hospital.

12. Sheryl Crow – The pop/rock/country singer battled breast cancer in 2006. She had “minimally invasive” surgery that same year, followed by radiation therapy. The treatment was successful. In November 2011 Crow discovered that she has a meningioma, a type of brain tumor that is usually benign.

13. Deborah Norville – Deborah Norville’s thyroid cancer diagnosis came to light thanks to a viewer who noticed a lump on her neck almost 20 years ago. In a YouTube video message she said, “We live in a world of see something, say something, and I’m really glad we do… When you work on television, viewers comment on everything. Your hair, your makeup, the dress you’re wearing. And a long time ago an ‘Inside Edition’ viewer reached out to say she’d seen something on my neck. It was a lump.” Doctors initially determined that the lump was benign but years later, the thyroid nodule eventually turned cancerous and Norville had most of her thyroid removed.

14. Marissa Jaret Winokur – During the early development stages of the Broadway musical, Hairspray, Winokur was diagnosed with cervical cancer. Out of fear of being replaced on the show, the actress didn’t reveal her condition to anyone except immediate family. Thankfully, she underwent treatment for the disease and made a full recovery. She also kept her job and went on to win a Tony Award.

15. Cynthia Nixon – In 2006, the former Sex and the City star was diagnosed with breast cancer during a routine mammogram. She initially decided not to go public with her illness because of the stigma involved, however, in 2008, the actress announced her battle with the disease in an interview with Good Morning America. She later became an Ambassador for Susan G. Komen for the Cure.

16. Christina Applegate – In 2008, the former Married with Children actress underwent a double mastectomy after doctors found cancerous lumps in one of her breasts. She has an inherited genetic trait, a BRCA1 mutation, which often triggers breast cancer. Her mother, Nancy Priddy, is also a breast cancer survivor.

17. Cybill Shepherd – In 2002, Cybill Shepherd was diagnosed with skin cancer, melanoma. She sought emergency treatment for the disease after looking in the mirror one morning and discovering a “scaly patch”.

18. Olivia Newton-John – Newton-John was diagnosed with breast cancer in 1996. She has remained cancer-free since her treatment of surgery and chemotherapy but still goes for yearly mammograms and an ultrasound just to be sure.

19. Edie Falco – In 2003, the Sopranos actress was diagnosed with breast cancer, but stayed mum about it, and chose not to announce it until the following year. She once told Redbook Mag that the show’s producer kept things quiet by working her schedule around her treatments.

20. Jaclyn Smith – Following a routine mammogram in 2003, the former Charlie’s Angels’ star was diagnosed with breast cancer, and ended up having a lumpectomy with radiation. In a CNN interview, Smith once said, “One of the most important things you can do is remember the power of girlfriends. Your family is there for you, but they get emotional. Girlfriends saved my day.”

21. Carly Simon – Simon underwent a mastectomy, chemotherapy and reconstructive surgery for breast cancer during 1997 and 1998. There was a lump in her breast for several years before then, but her doctors had advised her against surgery. Simon later recalled: “Then one doctor said, ‘You know what, I’d rather see it in a jar than in your breast.'” She also said that she felt “a little angry with myself” over the fact that she did not insist on taking it out sooner.