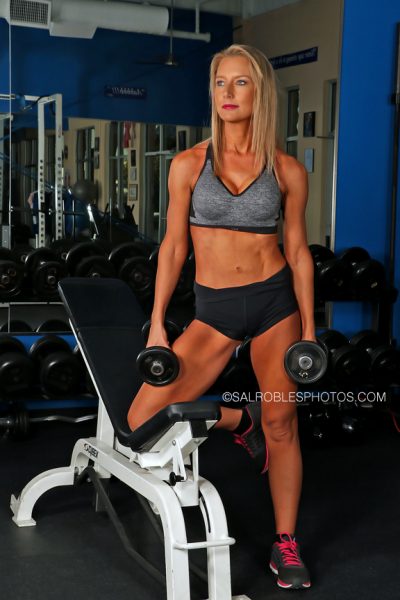 American Grit, hosted by WWE Superstar John Cena, is set in the wilderness of the Pacific Northwest—and home to some of America’s harshest weather. The show began with 16 of the country’s toughest men and women with backgrounds ranging in fitness to top branches of the U.S. Armed Forces, where they were pushed beyond their limits and faced with a variety of military-grade and survival themed challenges. Now, with just a handful of contestants left America is tuned in to see who will win up to $750,000 in prize money.

New Jersey native and American Grit contestant Lisa Traugott has an inspiring story. After birthing her babies, like most new moms, Traugott’s focus was the kids and before long she let herself go. It wasn’t until she received an invitation to her 20th high school reunion that she realized a drastic change needed to take place. She took her final maternity-leave paycheck of $150 and drove to the gym where she signed up for as many personal training sessions as she could afford. Five months later, she turned her life around and lost over 50 pounds, started a health and fitness blog and received her personal training certificate. Since then she’s become a hugely successful bikini bodybuilder, competing in some of the most elite competitions in the country, including the Arnold (Schwarzenegger) Classic.

We were delighted to interview the stunning mom about her journey to health and her time spent on a rewarding, yet challenging, show, which was not exactly what she expected. “…I thought that there would be drill sergeants screaming at us, we would be sleeping in tents and the other contestants would try to form alliances and tear each other apart. I was overwhelmed by how supportive our military mentors were and what a top-notch group of human beings the other competitors were,” Traugott reveals to Tinseltown Mom.

Although Traugott put up a good fight, she was eliminated on May 12th’s episode. Each week they had to do an elite military training task called an “Evolution.” The winning team got immunity. Traugott’s team, “Team Noah,” won four evolutions in a row. They lost evolution five and she was chosen to face The Circus, named from the Navy Seals training practice. The Circus is an intense obstacle course followed by an endurance challenge that keeps going until one person’s body gives out. Although that was her last episode she shares great memories from her experience. “Here’s where American Grit is different from other shows,” the fit bikini model boasts. “All the women in the house, from every single team, came into my room and told me that I was strong enough to do it. They even did my hair, make-up and nails and loaned me good luck items to wear. When do you EVER see that on TV? We called ourselves the ‘Girls of the Grit’ and we still talk to each other to this day.” 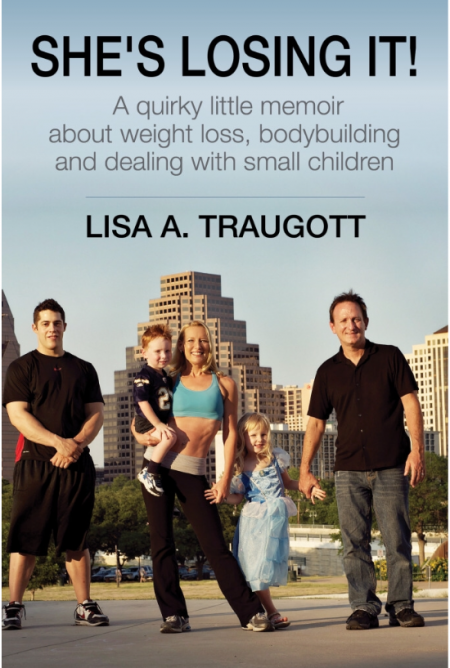 One can imagine that going on a show as intense as American Grit requires a special, advanced, method of training, but Traugott, who knew nothing going into it, other than it was a military show had only 10 days to prepare once she was cast. “…My trainer, Robin Johnson Jr., had me wear a weighted vest and walk into a lake and do squats. Mostly he wanted me to get comfortable with being uncomfortable. I took two swim lessons, a two hour obstacle course technique class with a former Marine, and a few Parkour lessons to learn what I could. To mentally prepare, I watched G.I. Jane, some Navy Seal training videos on YouTube and read The Art of War.”

Traugott’s biggest fear, ironically, wasn’t the challenging physical demands required. “I was so frightened that I would do or say something that would embarrass myself or my family. It’s intense being on camera 16 hours a day. Even when the crew goes home there are still cameras and microphones everywhere. My cadre, Noah Galloway, really helped me out here. He told me—and everyone on our team—to just be ourselves, avoid the house drama and remember that we should always remember our morals and not try to do something crazy just to get more camera time. After our very first win he set the tone when he turned around and said to us, ‘Y’all be humble.’”

The candid mom admits that just a few short years ago her life was a mess. Her business was failing; her marriage was failing and her doctor told her she was borderline obese. As a last ditch effort, at age 38 and size 14, she entered a bodybuilding bikini competition and it changed her life. “…I learned about nutrition and strength training—while potty training my son. My trainer pushed me past all those very valid reasons—I’m too old, I don’t have enough time, I’m a mom—and made me realize that those were just fears and I needed to stop lying to myself. Anyone who looks at my ‘before’ picture knows I don’t have special genetics. I was never involved in sports at all until my 30’s and didn’t start bodybuilding until I was 38. So many women think if they are over the age of 25 or have a family their best years are behind them, but that’s total BS. At 42 I’m in the best shape of my life and have won bikini competitions, and if I can do it, hell yeah, so can anyone!” 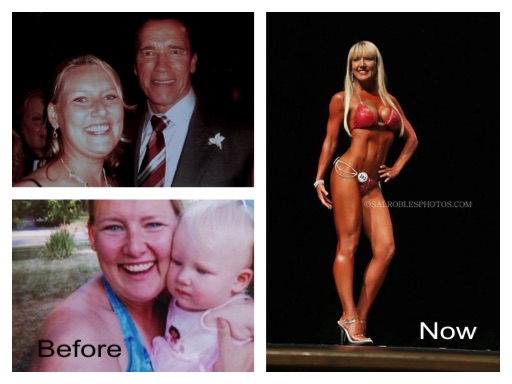 Traugott has been transparent since the beginning of the show. After having kids and gaining so much weight her husband heartbreakingly told her he loved her but was not attracted to her, a huge wake-up call in her life. “…I was so hurt and angry but in retrospect I’m glad he was honest and that we had the kind of relationship where we were able to say hard things to each other. His comment got me into the gym, but two weeks into training for the competition I realized that this had nothing to do with him or looking good in a bikini. I was doing this for me. I was tired of looking into a mirror and having a frumpy middle aged woman stare back at me. I wanted to feel confident, powerful and sexy. Self-esteem is not given, it’s earned, one curl at a time, one forkful of food at a time and one moment in time when you realize that you are worth the effort. It took me five months to lose 50 lbs. It took me three years to go from dead last to first place in a bodybuilding bikini competition. The knowledge I’ve gained and the confidence I’ve earned will stay with me for a lifetime.”

Because of her life experiences Traugott put pen to paper and authored a book. “I wrote She’s Losing It! for my former me, which is to say anyone who feels down on her luck and ashamed and ready to take control back in her life. The whole ‘no excuses’ thing is popular in the media, but I’m writing for the woman who has tried everything and still can’t lose the weight. Because before you can get to ‘no excuses’ you have to first truly believe that ‘change is possible.’ I’m living proof of this and I want to shout it out to anyone open to listening.” 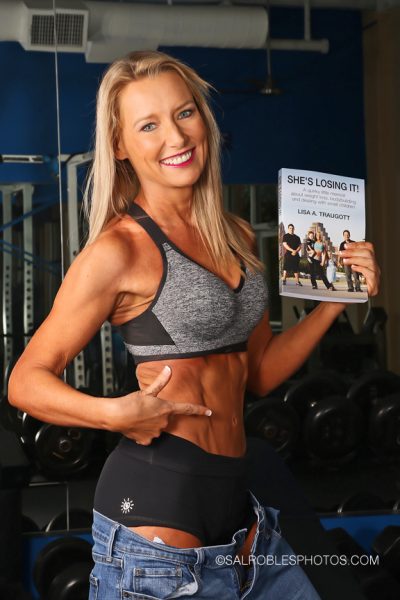 And for those busy moms challenged to find time to work out, the fitness enthusiast offers some sage advice. “First, I want to say that I totally get it. As the day goes on and chaos ensues sometimes I’m just begging for bedtime. That’s why I wake up at the butt crack of dawn and work out while everyone is sleeping. No one can interrupt me when they’re snoring. I check off ‘exercise’ off my to-do list and I truly view my gym time as ‘me time.’ I can work on my own fitness goals, release endorphins and catch up on Instagram on the elliptical machine. That puts me in a better place mentally to tackle my day.”

Traugott said women who read her book or blog from all over the world said they were ready to lose weight and asked if she could train them, “…So I created a weight loss program called the S.L.I. Method. It’s everything I learned through years of being an award-winning bikini competitor—who started out borderline obese—distilled down into three key components: 1. Nutrition; 2. Exercise; 3. Motivation. The program includes an actual bodybuilding diet—it’s intense—24 complete workouts—no gym required—along with a fitness video library demonstrating proper form for each exercise and lots of motivational videos and print outs. I break down EXACTLY what clean eating means, which exercises are going to lift your booty and give you a six pack stomach and how to push past those mental blocks that are preventing you from keeping the weight off. This is the method that I follow personally and that has been successful with my clients.”

For more advice and to sign up for Traugott’s free newsletter you can visit her website at ShesLosingIt.com