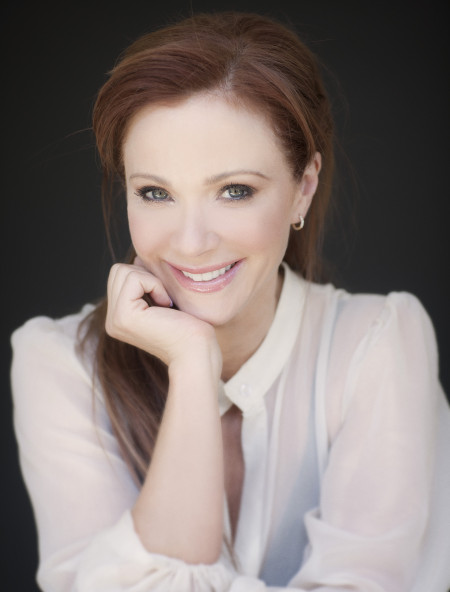 Lauren Holly has had an awe-inspiring career. With over 30 films under her belt like: Dumb and Dumber, Sabrina, What Women Want and Any Given Sunday; and more than 40 television shows to boast about, including: Pickett Fences, Chicago Hope, NCIS and her current show, Motive, Holly is a celebrity worthy of her tenure in Tinseltown.  And, although the mom of three moved far away from the glitz and glamour of Hollywood for the modest lifestyle of Canada her name will continue to be a respected fixture in the industry.

We were excited to speak with the devoted mom about her popular television show, Motive; battling child bullying with her son, and raising three boys away from the spotlight.

“I didn’t really think that raising my boys in Los Angeles was the best thing, only because there’s such a sense of entitlement that comes along with it… and they can’t think that the world is going to be like that,” the hands-on-mom explains.

The busy star travels the globe for her numerous film projects, but her current TV show, Motive, films in Toronto.  And, unlike most celebs and wannabe celebs who move to Los Angeles to work in film and TV Holly chose to move away from the limelight, even forfeiting her role on the highly regarded television show, NCIS.

“Everyone thought I was crazy to move because I wanted to leave NCIS and it was a big hit show, but originally I had joined the show for six episodes and it turned into three years.  So, in my mind I was like ‘but, I’ve done it.’ I chose Toronto because I wanted to keep working, but I wanted to be near my family; I’m a single mom.  And, I grew up in upstate New York which is about a 2-hour drive away from Toronto.”

In addition to being cast in the ABC crime drama Motive, a unique series in which the victim and killer are shown before the credits begin, the talented actress is also starring in several films: Hoovey, a fact-based story about parents dealing with their son’s life-threatening illness (due to premiere next Spring); Field of Lost Shoes, a true story about the American Civil War (opens Sept 26th); After the Ball, a Cinderella story set in the world of fashion (due for release in 2015), and Marshall the Miracle Dog, a film highlighting the special bond between a young boy and a Labrador Retriever, named Marshall (due to open this Fall).

With so many film projects to her credit and a regular gig on a hit television series we wondered how the hard-working mother managed to fit in that bonding time with her sons, Alexander (Azer), 13, George, 12, and Henry, 11. “Everyday is a work in progress.  It’s a constant juggle.  For me it just means the traveling is much more, because I don’t ever like to be gone long anymore, and they love to come with me, but only on short bursts… During the coarse of the Motive season, the deal is that each of them gets to go with me once by themselves, and then we do one trip with everybody together.  On the alone trip they like it; they get to pick out exactly what they want to do.  It’s really funny because the trips are so different.  I have my one son who comes with me and we’re out on bikes riding the sea wall, taking ferries, climbing rocks; my other son just wants to shop, and my other son really likes being on set, going and visiting, editing, that sort of thing.  They’re all really different.”

Although the actress is sure to get in that quality time with her kids, she shares the difficulties of being a single mom, “I think honestly it’s not the support as far as time and doing things with them, it’s the conversations of ‘am I doing the right stuff?’ It’s like bouncing things off someone who is as vested. They have their dad, but it’s not that daily thing… I just feel the weight of making sure I’m raising good men.” 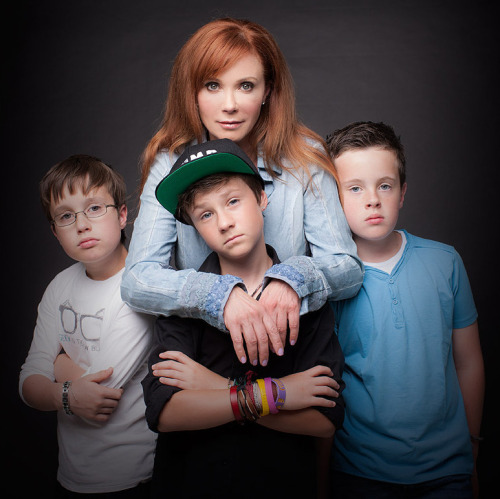 And, during that rearing process comes certain challenges.  Holly dealt with a difficult season in her family’s life no parent wants to face, and that was when she discovered that one of her sons was a victim of bullying, and the delayed reaction from the school.  “I wasn’t getting the response that I wanted from the school, which was all just going so slowly, and the kids were still bothering my son.  Plus, I had heard about incidents that the bullies were involved in with other kids, and I couldn’t believe that the school wasn’t moving more quickly. So, I went on Twitter and told my fans and the next thing I knew the superintendent from the school district called me and said ‘please stop, they’ve crashed the website for the district.’ It was wonderful because I got my situation taken care of, but it also made me upset because I thought most parents don’t have that, and it’s just completely unfair… It was very frustrating to me.  It was almost like I was getting bullied…”

The devoted mom shared her experience about her son’s ordeal. “He was not open at first which is also another real indication of how hard of a situation it was for him because he’s usually very open with me about everything. So, I was kind of shocked that he didn’t come to me, but I could tell something was going on because his behavior changed in general.  It was about two weeks and I asked for a meeting at school to ask if anything was going on, and they said ‘no’ they hadn’t noticed anything. And, I kept pressing and they told me about an incident involving my son that they had witnessed, so I came home and pressed my son and found a horrible bruise on his back, and pretty much flipped out…He told me everything, stuff had been taken.  He had started by going to his teacher and didn’t get any response. So, I was really pretty miffed about it all.”

Through her difficult trial the actress did offer advice for parents who might suspect that their child is a victim of bullying.  “I think you just have to know your kid, be observant of any changes from different moods, to not eating as much to not being excited to do things. Just in general, I noticed that my son alternated from being a little more withdrawn, to fighting with his brothers more. And, I think he was trying to act out because he was suffering at school. I think a lot of times as moms we have instincts, and just don’t squash them.”

Holly shares other parenting practices that have kept her household in tact. “I’ve got some rules that some parents may not agree with. I always tease them and say ‘there’s no such thing as privacy in the house.’ I mean, they all have phones now and I’ll take their phones and look at all their texts, and see what’s going on, or I know everything that’s in their drawers, or in their desks or in their school bags. And, they know that if it’s not dangerous, even if it’s somewhat naughty, I’m usually pretty okay with that…  There’s no privacy because my job is to protect them.”

Her take on social media.  “It’s a slippery slope. I’m learning with everyone else because this is the first time that parents have had to deal with this… This is a whole new thing.  The only thing that I think that I can do is just make sure I know everything.  That’s why I do that blanket no privacy stuff.”

It’s refreshing to see a mom taking a genuine interest in their kids’ lives and Holly’s special relationship with her boys seems genuine, if not desirable. We asked her to share some tangible tips for other moms who might be trying to develop a stronger connection with their kids. “Pick a time of day, any time of day, that fits in with their schedule.  People talk about the dinner table and that’s something that I try to do at my house. Always sit down at dinner together, and make it a priority. Some people may not be able to do that, so pick a time of day that does work for you so that you can dedicate to sitting there and trying to talk to your kids even if it’s just 15 minutes of broken conversation and a lot of silence… because eventually they start talking, and you learn a ton of stuff.”