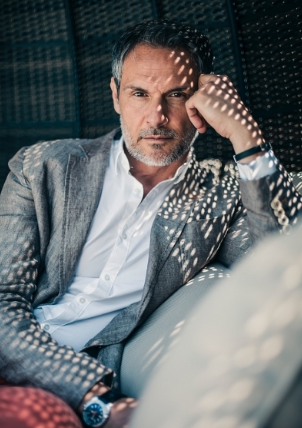 Meet JD and Martina Ostojic, two beautiful models gearing up to star in the highly anticipated reality show, Growing Up Supermodel. The Lifetime series tracks a group of up-and-coming models, eager to create a rewarding career for themselves, despite having famous parents they are constantly being measured against. The Ostojics, along with their son Janis, will join the cast of rising stars airing August 16th.

As Growing Up Supermodel approaches, JD and Martina are enthusiastic about this new adventure that’s brought them to the United States. “…we’re very excited to come from Belgium and come all the way to LA and be a part of this amazing show,” JD tells Tinseltown Mom.

JD has had a successful career for over 20 years and has been a distinguished face for Gucci and Versace. You’ve probably seen the handsome model on numerous pages of men’s magazines. JD got his start when he was very young. “…I was 16, I was in school…,” he says. “This teacher asked the girls if they knew anybody who would do a shoot with a motorcycle. The girls said they know somebody ‘JD, JD,’ and they were asking me. And I was like ‘me, for a shoot? okay.’ I was a little bit shy back then. So I did it, and that’s how it started actually… And after I did that the first time, I was like ‘I want some more’, I liked the paycheck.” Years later, JD got another opportunity to push his career forward “…when I was about age 20, I won a contest in Germany and there was 15,000 guys… First prize was actually to come to LA, arranged by David Hasselhoff. But sometimes bad things happen, and my mom was dying at the time, and I had just fell in love with my girlfriend—now my wife…” Unfortunately, JD didn’t make it to Los Angeles back then, but now, 27 years later, his Hollywood break has come back, and it’s his son Janis who championed that opportunity. Janis was discovered by an agent from one of his Instagram photos and that discovery eventually led to Growing Up Supermodel. 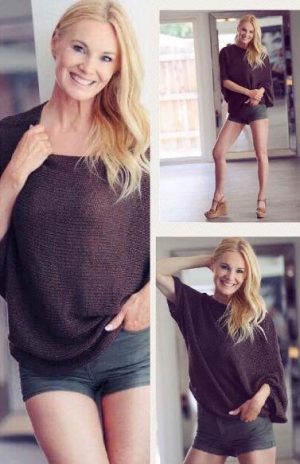 Martina’s breakthrough into modeling was more non traditional. “…when I was fifteen-years-old I was a huge fan of Michael Jackson,” Martina recalls. “So I started to get some performances as an impersonator of Michael Jackson. I was practicing in my room and my dad saw me dancing, and he was supporting me. I did some performances during the week, and my mom made the clothes. And then, every weekend I was doing contests and then I won the contests. …I was rehearsing with my friends, and that’s how I met JD. I was backstage doing my Michael Jackson thing and he was looking at me. …Before I met JD on the side, I was doing some modeling and some photoshoots. …entertainment was in my blood. …we met each other, and we had something together.” The pair began hanging out then began walking the catwalk and modeling in magazines for some of the world’s top designers. For years they traveled the globe to places like Paris, Milan, and Portugal.

The couple ultimately had their children while pursuing their careers and traveling. “…We were also modeling with our sons between ages 5 and 12, because they are always looking for family. They knew we were a model family, so they would always pick us up as a family. It was a great time,” JD reveals.

JD and Martina’s kids ages range from 11-25 and according to the dedicated parents open dialogue has been a key factor in their bond. “…I learned when I was a father to say everything to my children, how I feel really because I lost my parents at the age of 23/24, and today with my children we are together and very proud and always talk to them about what’s really going on. … I always tell my children no matter what just be honest and tell me the truth. I will always be your father and your best friend, so that’s the relationship we have with our children.”

The good-looking models enjoyed being a part of this new show and even shared some first-hand insight into challenges they faced, one month into shooting. “… It’s the Visa, we were waiting six months for it… …the law was changing, and they made it so difficult. … When I came to LA, after waiting for the Visa, we were waiting 4 hours in customs, and they were treating us like criminals; that wasn’t so nice. And when we finally got here, Martina was supposed to come 2 days later, and instead came 2 weeks later… My lawyer called me from New York, and he was telling me ‘Your wife cannot leave today,’ and my littlest son was crying on the phone. And I was like ‘Oh this is really bad.’ But after the rain… always comes the sunshine. But that was a bad experience for me.” JD says that because of the Visa challenges Martina was not in the first two episodes, as the laws were consistently changing. Fortunately, we’ll get to see all this drama unfold on TV.

Having a camera follow you around all day can be exhausting, if not daunting, but the Ostojics took their experience very well. “The first moments were very exciting, because it’s different than in front of the camera for a photoshoot. Filming your real life, after a few times… it becomes normal and you don’t see them anymore,” Martina reveals. JD adds, “You know there are cameras around, but for us, and for me… I’m just me, and I’m being me by myself, because I know there are a lot of people starting to “act” but I always think the truth will always come out, so just be yourself and it makes it easier, because if you are just yourself and truly who you are then it’s easy. But if you are acting and start to lie or whatever, the truth will come out.”

The family seems to be very grounded despite the allure of a glamorous lifestyle. They are also very supportive of Janis and never had reservations about his pursuit of modeling. “There is one thing I always say to Janis,” the mom of four shares. “There are two things that define you, your patience when you have nothing and your attitude when you have everything. And then you can find the balance in your life.” 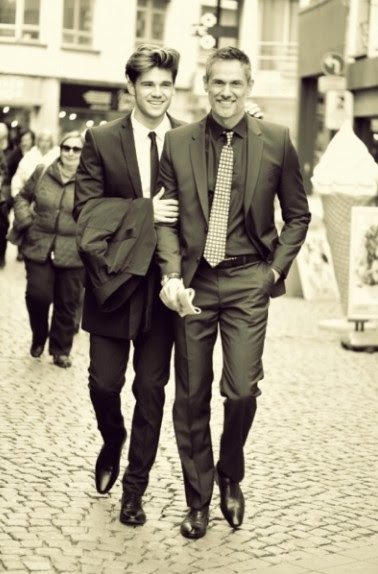 JD continues, “Never forget where you came from. That’s what we teach our children. Because you can be healthy and reach everything you want. But always be yourself because you never know what’s going to come. You have people who are sick. I always say ‘You came with nothing and you are going to go with nothing.’ I always say ‘Be grateful and happy just the way you are; you don’t have to prove something to the world… Just be yourself.’ I’m very proud of all my children and especially Janis, because he’s here now. When I hear him talking I hear myself, but I wasn’t like that at 22, nobody was there to teach me, because I lost my parents so and that’s why I am who I am today…”

The handsome duo, who will celebrate their 25th wedding anniversary this year, appreciates the success they have and refuse to let opulence or celebrity alter their values. “I want to say to Hollywood. It is possible to be a husband, and a father, to be a family man, and even a businessman, and watch out for your family,” JD proudly proclaims.

It’s apparent that they are grateful for all that they have and they cherish life’s precious moments. JD, continues, “I appreciate life. And to me the most important thing is health. Because I lost my mom to cancer. And I lost my father, he was on holiday and he had a car crash. So this is very important to me. And second is family.  You have those things you can make anything possible, because with a negative mind, you will never have a positive life… You can always be in a situation, and always be down. But there is always somebody who has it worse. So back on the ground, get yourself up and go for it. Look what happened to me. 27 years ago, I want to come to LA, and 27 years later, I come to LA. So it was meant to be. You need patience. I wasn’t ready back then, but I’m sure my son is ready today.”

Be sure to check out the premiere of Growing Up Supermodel August 16th at 10/9c on the Lifetime channel.