When we think about ADHD, we often associate kids with having an abundance of energy who can’t sit still or focus in class, but what happens when those kids become adults? How are adults coping with ADHD? These famous moms share their stories. 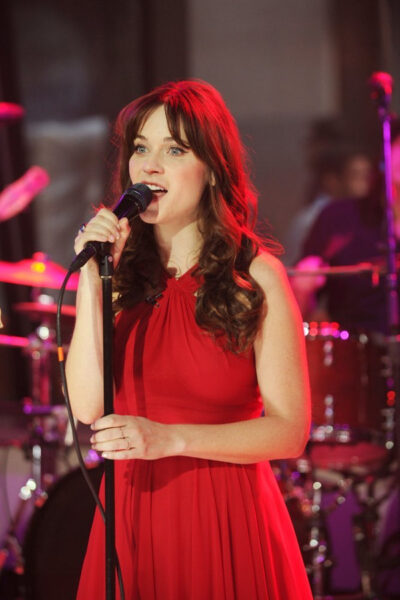 1. Zooey Deschanel – On her website, HelloGiggles, Zooey Deschanel revealed her ADHD diagnosis in a blog post and posed this question to her audience: “Are you an unmedicated adult with Attention Deficit Disorder who also LOVES to do crafts? I AM! I barely have the patience to write this opening paragraph (I have already gotten up four times), so I need to focus my unfocused mind on projects that can be completed very quickly. Am I going to knit a scarf? NO! Will I knit a scarf for a bunny? I don’t know. Maybe, if it’s a really small field bunny and I am knitting with giant knitting needles. I recognize I will never complete something that takes any kind of patience (sorry needlepoint) so I decided to focus this blog on crafts I CAN complete.”

2. Solange Knowles – When Solange Knowles was first told she had ADHD she did not believe the doctor. “I was diagnosed with ADHD twice. I didn’t believe the first doctor who told me and I had a whole theory that ADHD was just something they invented to make you pay for medicine, but then the second doctor told me I had it,” Knowles revealed to Blackdoctor.org. She’s always been full of energy and said that in the past her sporadic speech and effervescence led people to believe she was on drugs. The singer said she feels everyone in the music business seem to show indicators of ADHD. “The symptoms seem to apply to everyone around me in the industry. Loss of memory, starting something and not finishing it…”

3. Cammi Granato – According to Psychology Today, for years, former US Women’s ice hockey captain Cammi Granato blamed life’s overwhelm on forgetfulness, that is until in 2003 she heard a sports psychologist talk about ADHD and the symptoms fit her perfectly. She then consulted a doctor, who confirmed her diagnosis. “I’ve probably had AD/HD my entire life,” Granato said. “Growing up, my parents called me ‘the Little Tornado.’ But in a  house with six kids, my behavior probably seemed normal.” On the ice, of course, Granato’s frenetic behavior worked to her advantage. “The sport doesn’t require a lot of thinking,” she said. “You just react. You’re in the moment. I was a natural at that.” Granato said it was a relief to realize that AD/HD was behind her inability to deal with day-to-day responsibilities. “I’d just assumed I wouldn’t finish projects or return calls because I was lazy… Now I knew the cause, and could focus on solutions.”

4. Mel B (Melanie Brown) – Spice Girl Mel B revealed her mental health diagnosis on Paul McKenna’s Positivity Podcast in 2019. The fit mom said: “I work out to help my mind. I do have ADHD, as well as dyslexia and dyspraxia.” The performer said exercise aids in her meditation and gets rid of her anxiety, from the inside out. “…It helps me focus on me for that one hour. I do have mental illness, you have to be a little bit crazy to do what I do…”

5. Karina Smirnoff – Dancing with the Stars pro, Karina Smirnoff, was diagnosed in her early 20’s after a friend recognized how ADHD was impacting her life. She was on Distraction podcast in 2017 and spoke about her prognosis. In the beginning, she heard a verdict but then the more she began learning about ADHD and understood how others coped, she realized it wasn’t such a bad thing to have. “We are members of an elite group. I think when you’re a kid it’s a little bit different because you try to figure out why you can’t keep your attention. And people always say, ‘can you please stop being hyper?’ but when you get to an older age I feel like it definitely becomes an asset because first of all, you have energy for days to do things, and then you can multitask…” The professional dancer tried medication, but since she doesn’t like taking pills, she uses dancing to help cope physically, emotionally, and mentally.

6. Lisa Ling – Journalist Lisa Ling spoke about her ADHD struggles with Today’s Parent. “In a strange way I do feel like it has helped me. I can hyper-focus on things that I am excited and passionate about. I would never have said that as a kid, though. I had trouble concentrating in school, and it really affected my grades and self-confidence. I had to work and try very hard to get ahead. I think that learning those skills and pushing myself helped me become the person that I am. It inspired a work ethic in me that I may not have had, if I hadn’t had those struggles growing up. Increasingly, we are so overstimulated: a phone in one hand and a remote in another, all while being in front of… computer. If you don’t know how to handle yourself it can be overwhelming.” Some of Ling’s coping mechanisms include quiet time every day and regular exercise.