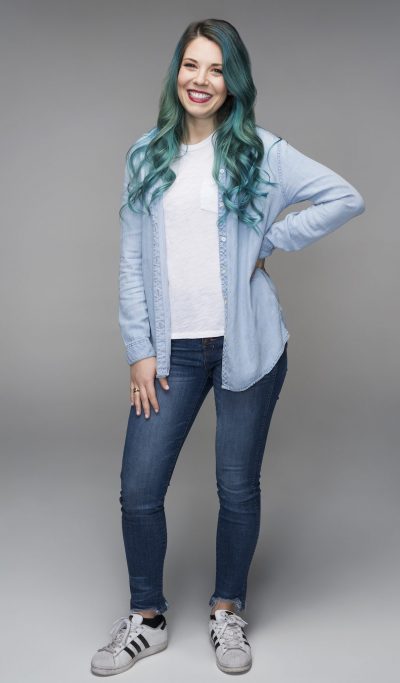 Hannah Williams is a mom in progress—like all moms—no surprise there. She’s just courageous enough to broadcast her flaws online for public scrutiny and judgement. If you’ve had a chance to watch one of her shows you’ll see that she’s not only imperfect, but playful, attentive, loving and very creative. In our assessment ingredients of a good mother. She calls herself the “world’s Ok-est mom.” Mom In Progress is the first original series from Playfull, the millennial parenting brand developed jointly by BuzzFeed and NBCUniversal Digital Enterprises. The six-episode series features BuzzFeed producer and millennial mom Hannah Williams, as she tackles motherhood — from birthday parties to date night to sugar — with the help of her 6 and 3-year-old sons Jackson and Wyatt.

We had the pleasure of speaking with Williams about her unscripted series, Mom In Progress and the evolution of the show. “…Playfull was kind of just a progression of this existing partnership. I had been making parenting content at BuzzFeed for a really long time so it was a very natural fit for all of us to collaborate and work together to launch this series,” Williams tells Tinseltown Mom.

Williams regularly infuses innovative parenting into each segment making for an amusing show that’s not only entertaining but endearing. For example, she once let her kids plan dinner, which can’t be easy for a foodie like Williams, who is also the creative lead for BuzzFeed’s branded TC content which includes their cooking site Tasty. “…that’s my love language so if I’m trying to tell someone I love them I cook them a nice meal. So that’s just always been something I love to do and getting to do it for work is a dream come true…” In another entertaining episode the hands-on mom lets her darling boys plan a date night for her and her husband. It’s a very engaging show and a distinctive take on parenting. Kids are full of ingenuity so why not mix a little imagination into the parenting equation? 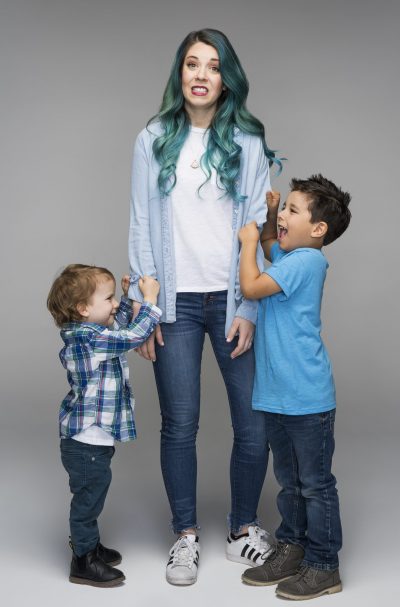 In 2015, NBCUniversal and BuzzFeed became partners, when NBC invested in the millennial-focused media company. Recently, the two entertainment powerhouses launched Playfull, a Facebook page that targets young parents. When the opportunity for Mom In Progress presented itself Williams was definitely onboard. “We started just doing some scripted parenting content. It’s always been a passion project of mine, just coming into the entertainment industry and media… and having kids, I didn’t see much out there for any parents at all out on the internet, and anything that was quite relatable…  …And so when BuzzFeed and NBC launched Playfull… it all fell into place.”

The premise for Mom in Progress is like none we’ve seen on air. “…To me it’s a very real and raw documentation of my journey through motherhood. I’m trying to figure out what approaches and methods work best for our family because I feel like there’s not one parenting style that works perfectly and applies perfectly to a family. I think we need to take and borrow from a bunch of different styles. So by trying these latest trends I’m trying to show that being a mom is messy—it’s imperfect and it’s pretty hilarious.”

And with the hilarity, Williams shows audiences that while being a mom is rewarding it’s far from flawless. “…just trying to present an authentic voice for this audience of millennial moms. On social media there’s a lot of pressure to be perfect at all times so we want to make some content that’s a lot more realistic for them.”

We know that there can be different interpretations of “authentic parenting” so we wanted to make sure we knew what Williams’ take meant. “I mean, I think ultimately to me the only thing that constitutes authentic parenting is being true to yourself. As long as you’re happy with yourself, it doesn’t matter what anyone else thinks. And as parents, we know our kids’ best so we’ll do what’s right for us as long as everyone is happy and healthy. And some parents aren’t comfortable with sharing the negative—they only want to share the positive and that’s okay. As long as everyone is true to themselves, you know, I think that’s as authentic as you can get.”

Although geared towards younger mothers, Williams’ show is actually quite compelling for moms of all ages. At a minimum, it will motivate parents to spend quality time with their kids, or try fun things never thought about. “…a lot of the ideas of each episode inspire other moms to try it—maybe not on the scale that I try it because I go hard and I go all in,” Williams reveals.

As far as the inspiration behind each show’s theme, Williams says since the show is not scripted and you’re dealing with kids—in particular her kids—not much of it is planned. “…So all of the episodes are just things that I’ve been wanting to explore for my family and see how the kids react and see if they enjoy it. So they’re all just ideas of things that I just wanted to try and I thought that other parents might be interested in learning more about.”

We’re hoping to see a second season as the mom-of-two says that as long as it resonates with parents, and her sons are committed she’ll keep doing the show. “My kids absolutely love doing videos with me. They have a blast with all of these little experiments. So as long as they’re enjoying it, and we get a lot out of it as a family… It’s really good quality time for us together. So as long… …as people are liking it we’ll keep doing it.”

If anyone wants to engage with Williams after each episode she personally answers questions live on Instagram, so be sure to watch the show and get your questions in!

Mom In Progress airs Thursdays on the Playfull Facebook Page or on the BuzzFeed Videos’ YouTube Channel.