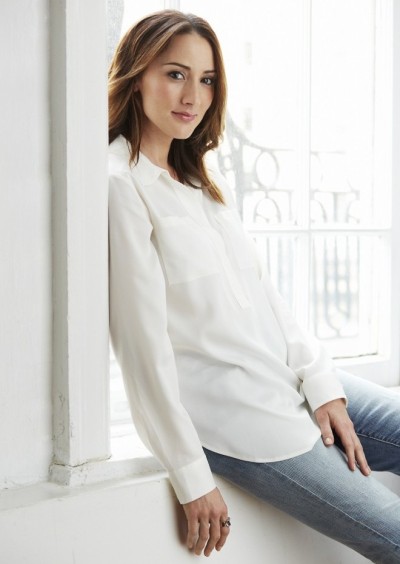 Bree Turner has one of the most desirable jobs on television.  She not only stars in NBC’s hit fantasy-drama Grimm, now in its 4th season on the air, but she plays the multi-dimensional Rosalee Calvert, a fox-like creature with a dark past, and a dream role for any actor.  From the dynamic way that she brings the character to life it’s clear that Turner’s thespian skills are polished beyond measure, but she didn’t begin her Hollywood career by way of acting.  In fact, she first made her way onto the big screen as a professional dancer.  “It was all I ever did; all I ever knew.  It was my biggest passion.  I wanted to be on Broadway; I wanted to be a Rockette; I wanted to be a chorus girl; I wanted to go to New York and struggle and do the dancer thing out there…” Turner tells Tinseltown Mom.

After attending UCLA on a dance scholarship, the actress performed in movies such as My Best Friend’s Wedding, The Big Lebowski, and She’s All That.  “Looking back now, I think I was always a storyteller even through my dance, and when acting presented itself it seemed like a really logical next step.  But, I didn’t know if I’d like it or if I’d be very good at it.  I kind of started late; I mean I wasn’t a theater child actor. I took my first acting class at 23 and it was just like being in a warm cozy blanket and it was really what I was supposed to be doing, and my dance kind of led me to that path.”

Turner’s love of dance provided a good work ethic so when she decided to transition into acting she took classes and began landing speaking roles in various films. She eventually booked a reoccurring role on NBC’s Grimm, and then got bumped to series regular in the second season. “It’s a huge gift.  Every single one of us on the show understands how very lucky we are… Television is a ruthless landscape right now; nothing is guaranteed no matter your biggest star, your biggest budget. It doesn’t mean you’re going to stay on the air.  So, we feel really lucky.  We pinch ourselves all the time. We’re very grateful.  It’s a very cool cast because we’re all pretty much the same age.  We’re all just working actors so we have this perspective of gratitude and also that everything’s fleeting as well, and this will end and we’ll all be unemployed again and back to the starting zone.  So, we’re just living in the moment and enjoying it.”

When you watch the show you really feel like you’re getting a true cinematic experience, forgetting that you’re watching TV in the comfort of your home, which is a real coup to how television has evolved. With Grimm even if you start watching late in the season it’s easy to catch on to the story plots. Turner credits that to the shows procedural format mixed with a serialized platform. “I think our show is really cool because it’s not really definable in any way.  I think we have the people who can just jump in and I think some people prefer the procedural format of the show, and then we have the people really into the lure and over-arching story plots, and we also have that to satisfy that fan.  We have a little bit of everything, so it depends on what you want.” 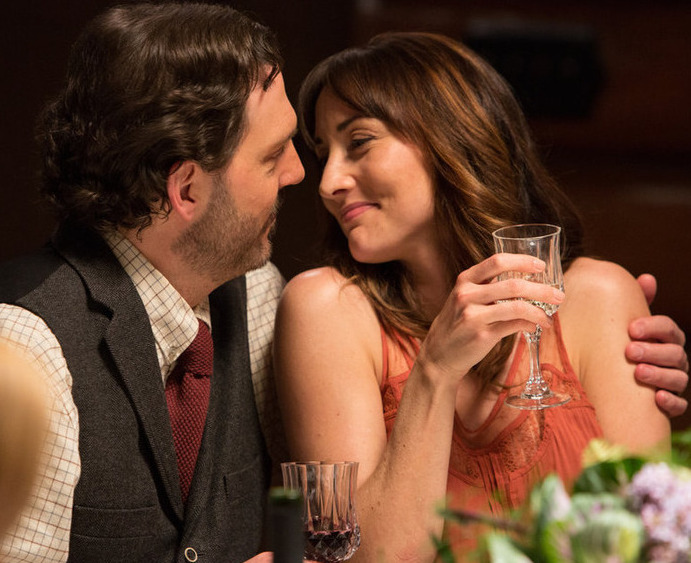 Turner’s portrayal of the endearing Rosalee is so authentic that it brings a refreshing balance to the show’s deep subject matter, but she also has a dark history that the star gives us a glimpse into.  “…for Rosalee I think when she came on the scene in season one she had a lot of walls up, a lot of guards up, and not that sure if she was into this new life with these people.  And, I think that season two and three was this slow progression of her allowing herself to be vulnerable. I think Rosalee is a very good person, a very loyal person.  I mean she has a lot of baggage, but I don’t think it’s unrealistic to think that someone can just decide to be a new person.  Also, she’s a fox creature, so I think that shiftiness comes into play.  Not that Rosalee is ever insincere, but for me I just decided to be this new person with Monroe and he saved her life.  He allowed her to have the life she always wanted to live but never allowed herself to live, or didn’t feel like she deserved to be living; and I think it’s really authentic that she’s stepped into this very sweet, loving, domestic-type role.  But, what’s cool about season four, which we’re already in the 9th episode of filming, is she becomes challenged in a lot of ways that we haven’t seen yet on the show, and a lot of who she is in her core is able to come right out.  It’s really fun. As an actress it’s always fun to play the dark stuff, so I’m kind of in the middle of doing that now with this story line.  There’s a lot of very truly really scary things happening right now between Monroe and Rosalee and her street self is utilized in a very productive way…”

In real life, Turner is a hands-on mother who has had her share of challenges.  She suffered serious health problems after her first delivery, and even more complications during her second pregnancy, which happened to be during season one of Grimm. “…My first pregnancy I had gestational diabetes with my daughter.  My pregnancy was smooth but, part of my placenta broke off, so after I delivered my daughter it was left inside of me and no one knew.  And, then I ended up hemorrhaging like eight liters of blood. It was very scary, very sudden, and no one was prepared for that.  But, I was at a great hospital and everyone was incredible, and then strangely with my second pregnancy I did not have diabetes, which I was surprised about because usually that happens again.  I had placenta previa with Dean.  I was actually on the plane flying up to Portland to shoot season two, and day one was all Rosalee’s stuff and I’m on the plane and I started hemorrhaging on the plane and I couldn’t believe it.  So, I had to drive myself to the emergency room in Portland, and I was just like ‘this can’t be happening.’ …My producers were incredible because I basically said I cannot go to work this week.  And, that’s a very big deal to not go to work.  It’s a very expensive problem, but they never made me feel uncomfortable about that at all.  I was on exclusive bed rest for a week at the beginning, but then it turned into a modified bed rest, which definitely changed the landscape of the show because it’s a very physical show and I basically couldn’t do much except stand and sit.  So, I had three body doubles, two stunt girls.  There were five of me walking around the set. It was pretty funny. So, I had to deliver him via c-section about a month early, then in the middle of my delivery I ended up having placenta accreta, which no one knew, which meant my placenta had grown into my uterus.  So, I hemorrhaged again in delivery.  I was losing a ton of blood and I ended up having to have an emergency (partial) hysterectomy in that moment… so it was kind of heavy…”

The courageous mom has two children, 2-year-old son, Dean, and 4-year-old daughter, Stella, and they all reside in Oregon, where the show films, along with Turner’s husband, Justin.  With her busy schedule we wondered how the actress balanced work with family.  “I’m incredibly organized to an annoying degree.  I have an amazing support system.  I have a life-changing nanny who’s like my wife.” (LAUGHS) “My mother, my aunt…my husband is incredibly hands-on.  He’s a private practice orthopedic surgeon so he’s able to create his own schedule.  So, he’s up here for long chunks and ‘Mr. Mom’ when he is so we make it work… Pretty much without those people I could never do what I’m doing… We do night shoots; we do 16-hour days.  When I’m at work I am gone.  And, there’s really no down time for me either, but I’m also really lucky because with an ensemble show I’m actually able to be home a lot.  It’s kind of the perfect job for me right now, honestly, because I’m at work enough for me to feel good because I love my job, but I’m also home enough for me to feel like I’m very involved with my children… I like doing all the stuff with my kids, my husband and I both do. We like being sleep-deprived and crazy with our kids…”

In addition to her work in television Turner is also involved in various cancer research charities, including Stand Up to Cancer, and Phase One.