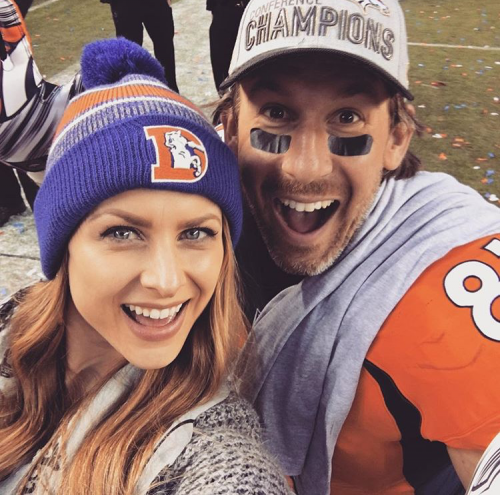 For several years in a row the Super Bowl has set a record for being the most watched television event in U.S. history. Whether you’re a die-hard, jersey-wearing football fan, or a true-blue Super Bowl ad enthusiast, chances are you’ll probably be watching Super Bowl 50 on February 7th. While many people are planning fun parties, hosting special events or just watching the big game solo, Angela Daniels, wife of Denver Broncos tight end Owen Daniels, is choosing to treat Super Bowl Sunday like a normal game. “That is the only thing that will keep my anxiety in check and hopefully help calm whatever nerves Owen might have,” Daniels tells Tinseltown Mom. Having previously played for the Houston Texans, the Baltimore Ravens, and now the Denver Broncos Owen Daniels is getting ready to make his first Super Bowl appearance, a rare feat in a football player’s career.

So, with the big game approaching and all eyes resting on the talent of the players we had to know what the Daniels’ household were feeling. “A unique combination of relief, excitement, and anxiety,” the proud wife reveals. “Owen has been in the league for a decade now, which is considered a long time for his profession, and he is at the pinnacle of his career. It’s so rare for someone to achieve that aspect of their profession and for him, waiting this long to get there is worth the wait. In a sense, no matter what the outcome of the game, we are happy and I am so proud of him for getting this far. But of course, my anxiety is at an all-time high.”

While the inevitable pre-game angst typically accompany being married to a professional athlete Daniels shares what it’s really like to be the wife of an NFL player. “It’s fun in the sense that it’s like nothing I’ve ever experienced. Unlike some wives, I met Owen after he started his professional career and I knew absolutely nothing about football. He’s such a good teacher, though, I caught on quickly. But, of course, there’s an inherent stress.” The devoted wife not only has the pressure of wanting her team to win, but the compounded worry of hoping her husband doesn’t get hurt during a game. Having to cope with a prolonged injury or career-ending injury would be devastating, to say the least. “Like all wives, I can’t actually breathe or relax until the game is over—no matter the outcome—and I see Owen walk into the locker room on his own two healthy legs. I’m not quite sure what watching a football game in person is like without that kind of stress.” 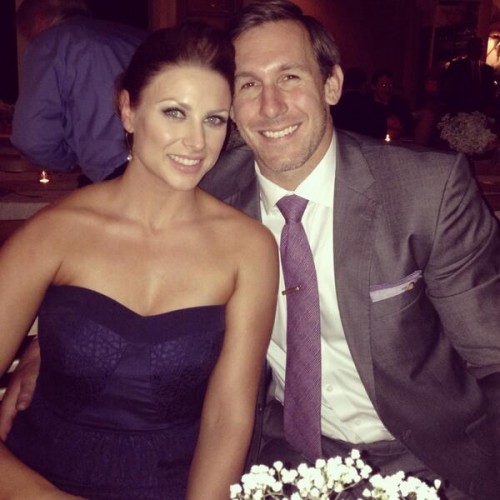 Thankfully, Daniels is fortunate to have a support system with the NFL wives, but she also has other dear friends to keep her balanced. “I am lucky enough to be able to have a handful of close friends from every important step in my life—high school, college, law school, job, and now NFL. I think it’s important to have a diverse group of close women in your life who understand every part of you and the NFL is just one tiny aspect of what makes me ‘Me.’ It’s nice to have a good group of women who ‘get’ all the ups and downs that come with being married to a professional athlete.”

The good-looking couple have been married since 2013, and hearing about their love story and the special bond that they share is not only sweet, but inspirational. “When I moved to Houston, I knew one person, my best friend Emily from college. She introduced me to an amazing group of women, all of whom were football savvy and played on a flag football team that raised money for Alzheimer’s (Blondes vs. Brunettes)…all of my friends are blonde apparently as they all played on that team, which Owen coached. The cause was doubly important to me since my grandfather suffered from Alzheimer’s. I went to the game to cheer on my friends and met Owen, who had essentially been ‘pre-approved.’ What’s special about him is something that stuck out the night I met him and has never faded—he always puts me first. His focus on me the night we met was palpable and since then, he has always made me feel like I’m the most important person in the room. It’s just easy with him… to trust him and to love him.”

Daniels, whose career as an attorney saw her prosecuting child abuse cases, is also a first-time mother. She regularly tried hard criminal cases and dealt with complex legal issues, but babysitting or even holding babies was not something that she was used to doing, and although she admits to having some initial fear, the transition into motherhood went smoother than expected. She and Owen welcomed baby Henry last July. “… once he got here, and the day we got home alone without all the hospital staff, it sunk in that I was a mother. And then it just happened. I didn’t have time to think about it, I just became a mother. New first time moms don’t really have a choice, it’s survival mode or nothing! But it came so naturally, and we are both—Henry and I—still learning as we go, and having fun doing it.” 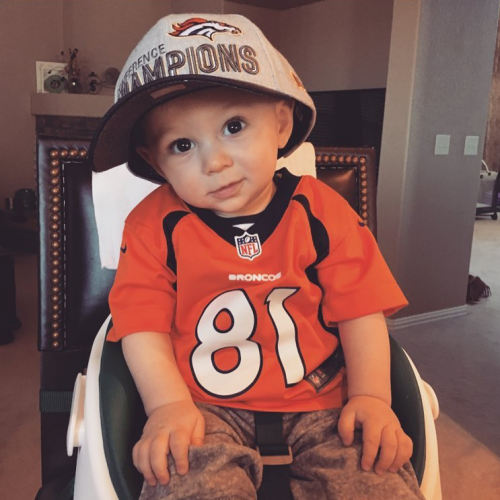 Presently, Daniels is a stay-at-home mom to her precious little boy. During the regular season she and baby Henry remain home in Houston, but they travel as a family for playoff games, and of course the Super Bowl. And while many couples have pre-game habits that help ease the jitters before a game, Daniels’ routine is quite funny, if not a little quirky. “I always get to the game early and meet him in the end zone during warm-ups where I tell him a super corny joke; that’s been our pre-game ritual for more than half his career.”

The new mom also gushes about the unyielding love she has for her son, but understands that mommy-time is important. “… I truly cherish those moments after we put him to bed. He sleeps through the night so once he’s down, I know I have the rest of the night to relax—drink a glass of wine, watch a full TV show, read more than a couple of pages from the news or a book, catch up on texts or emails. It’s the small things I did before becoming a mother that make me still feel like an independent human being.”

After the Super Bowl, whatever the outcome, curious minds want to know what the Daniels’ household will be up to. “We will move back to Houston for the offseason where we have our permanent home,” Daniels says. “…Relax and enjoy time together as a family—at least until training camp starts back in April.”