It’s been said that sports is the universal language that bring people together, and more than ever people need to come together for a common cause. It doesn’t matter where you’re from, your religious beliefs, or economic background, when you’re rooting for the same team you’re on the same team, even if just briefly. Sports promote a sense of belonging and identity by tying people together to a common goal. These 5 inspirational sports dramas, all based on a true story, deal with racial tension and injustice.

*This post contains affiliate links; we may net a small commission if you make a purchase after clicking a link, at no cost to you. Read my Disclosure Policy HERE* 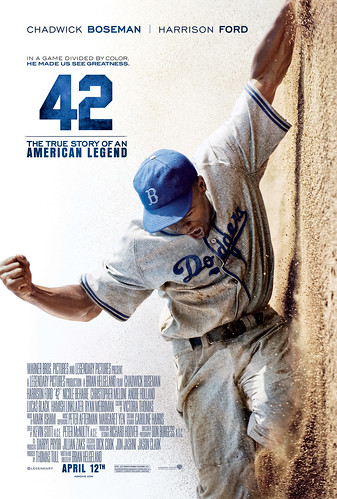 1. 42 – In 1946, famed Brooklyn Dodgers manager, Branch Rickey (Harrison Ford) defies major league baseball’s notorious color barrier by signing Jackie Robinson (Chadwick Boseman) to the team, the first African American to play in Major League Baseball in the modern era. Robinson broke the baseball color line when he started at first base for the Brooklyn Dodgers in 1947. The heroic act puts both Rickey and Robinson in the firing line of the public, the press and other players. Robinson faces inevitable racism, but demonstrates bravery and admirable restraint by not reacting to extreme abuse and insults, and lets his God-given talent silence the critics. AVAILABLE AT AMAZON to rent or buy this movie.

2. The Express: The Ernie Davis Story – This film is based on the life of Syracuse University football player Ernie Davis (Rob Brown), the first African American to win the Heisman Trophy. The story begins in 1949 with 10-year-old Ernie having to run for his life against racist bullies. It is there that we see how athletically gifted he is as he outruns them all. Most of the story takes place while Ernie is at Syracuse playing football under the guidance of Coach Ben Schwartzwalder (Dennis Quaid), leading up to his historic Heisman Trophy win. AVAILABLE AT AMAZON to rent or buy this movie.

3. Glory Road – Glory Road showcases the events leading to the 1966 NCAA University Division Basketball Championship. Don Haskins (Josh Lucas), head coach of Texas Western College (now known as University of Texas at El Paso or UTEP), decides to build a team based on talent rather than race which results in an all-black starting lineup, a first in NCAA history. Although the team are winning all their games, the community is outraged with having so many black players on the team, and the fact that Haskins starts all of them is an even bigger offense. Throughout the film, the players are hit with discrimination at every turn: they are refused entrance into restaurants and hotels; a player is beaten and humiliated by a group of racists; the players and coach are threatened repeatedly, plus other tense encounters. The abuse finally takes its toll on the players and the fate of the team is in jeopardy. AVAILABLE AT AMAZON to rent or buy this movie.

4. Woodlawn – In 1971, a government mandate allows gifted high school football player, Tony Nathan (Caleb Castille), and other African-American students to desegregate Woodlawn High School in Birmingham, Alabama. In the midst of cross burnings and riots, Tandy Gerelds (Nic Bishop), the Woodlawn Colonels football coach, struggles to ease racial tensions between his players, but when Gerelds allows Hank (Sean Astin), an outsider, to speak to his team a miraculous change begins. Hank, who has been radically affected by the message of hope and love he experienced at a Christian revival meeting, tells the players a “better way” is possible through following Jesus. Nearly the entire team, black and white, give their lives over to Jesus and the spiritual change has a profound effect on the coach, the school and the community. AVAILABLE AT AMAZON to rent or buy this movie.

5. Remember the Titans – Remember the Titans is based on the true story of African-American coach Herman Boone (Denzel Washington), and his attempt to integrate the T. C. Williams High School football team in Alexandria, Virginia, in 1971. Bill Yoast (Will Patton) becomes his assistant coach and together they lead a diverse group of football players who learn to truly work together as a unit, putting racial differences aside, for the greater good of the team, leading to genuine friendships on and off the field. The football players achieve racial harmony and impacts the community positively. AVAILABLE AT AMAZON to rent or buy this movie.