Marriage can be rewarding and blissful, but it can also be challenging and painful. Add an extramarital affair on top of that and most unions won’t survive. These famous moms suffered embarrassment, heartache, and a public display of humiliation from their cheating spouses, but worked through their difficult journey and kept their union intact. 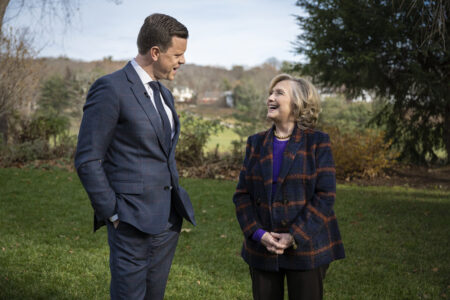 1. Hillary Clinton – In 1998, US President Bill Clinton had a sexual relationship with White House intern, Monica Lewinsky. The news of this extramarital affair and the resulting investigation led to the impeachment of President Clinton, and his subsequent acquittal on all impeachment charges of perjury and obstruction of justice. Mrs. Clinton stayed with her husband and they’ve now been married for 40 years. In her 2003 memoir, Mrs. Clinton wrote about their union, “No one understands me better and no one can make me laugh the way Bill does. Even after all these years, he is still the most interesting, energizing and fully alive person I have ever met.”

2. Tori Spelling – Another reality star who suffered a cheating scandal in front of the cameras was Tori Spelling. After Spelling discovered that her husband, Dean McDermott, strayed in their marriage they went through counseling and reconciled. On her blog, Spelling wrote: “As all of you know, our family has been through a lot this last year. I’m happy and proud to say that we are doing really well, and that Dean and I are working very hard to make our relationship and our family better than ever. I’m proud of Dean for all of the hard work he’s been doing on himself…” 9 years as a couple and the duo seem to be going strong.

3. Vanessa Bryant – In 2003, late NBA All-Star Kobe Bryant was accused of sexually assaulting a 19-year-old woman. The case went to trial and eventually dropped, but his wife, Vanessa, stayed with him throughout the entire ordeal. She even made a public statement during that time: “I know that my husband has made a mistake — the mistake of adultery. He and I will have to deal with that within our marriage, and we will do so. He is not a criminal… He is a loving and kind husband and father. I believe in his innocence.” The couple were married almost 20 years before Kobe was killed in a helicopter crash.

4. Kathie Lee Gifford – In 1997, after 10 years of marriage, Kathie Lee Gifford received terrible news when The Globe tabloid published photographs of her husband, Frank Gifford, with a flight attendant in a New York City hotel room. (The flight attendant was later discovered to have received $75,000 from The Globe to seduce Frank.) Although the trauma and shame were difficult for Kathie Lee she remained with her husband.

5. Kendra Wilkinson – In 2014, former NFLer Hank Baskett cheated on his wife, Kendra Wilkinson, with a transsexual model when Wilkinson was eight months pregnant with the couple’s second child. The reality duo went through a turbulent time and had marriage counseling in front of the cameras. The couple remained together for several more years, but Wilkinson eventually filed for divorce in 2018.