With so many beautiful celebrities making headlines for salacious sex scandals and hot Hollywood hookups many assume that all the rich and famous give in to their sexual urges but, believe it or not, these superstar moms abstained from sex until after that walk down the marriage aisle. 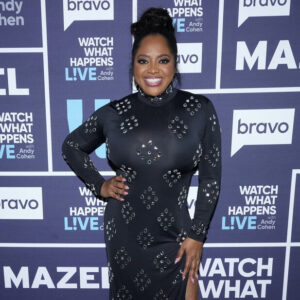 1. Sherri Shepherd – TV host and actress, Sherri Shepherd, was clear on her position of “no sex” before marriage to second husband, Lamar Sally. Although she and Sally are no longer a couple they did wait to consummate their relationship on their wedding night.

2. Ali Landry – Former “Doritos Girl”, Ali Landry, has been very vocal about her stance on abstinence and the commitment she made with second husband Alejandro Monteverde to wait on sex until marriage. “Instead of resorting to that at the end of the night we probably closed down every restaurant in Los Angeles, just talking,” the beautiful mom told Tinseltown Mom exclusively.

3. Adriana Lima – Victoria Secret’s model, Adriana Lima, abstained from sex until her wedding night with her ex husband, former NBA player Marko Jaric. Of her decision, she told GQ magazine,“They have to respect that this is my choice. If there’s no respect, that means they don’t want me.”

4. Kathie Lee Gifford – The TV host wrote in her memoir that she waited for sex with her first marriage.  “I was the Last Hollywood Virgin,” she writes.  And at 22, she met and married the leader of her Bible study group, Paul Johnson, but the marriage ended after six years.

5. Danielle Jonas – Although the former hairdresser and reality star is famous for marrying Kevin Jonas of the Jonas Brothers fame, she and her husband did wait to have sex until their wedding night.  Kevin once told Bliss magazine UK, “Sex was not worth the wait. After we did it, I was kind of like, that’s it?”

6. Rebecca St. James – The Grammy Award-winning Christian recording artist was 33 when she and her husband, bassist, Jacob “Cubbie” Fink, got married and became sexually intimate. When St. James was on Fox News she defended her position. “Can I just say that married sex – and I’ve never been with anyone else – is so cherishing and beautiful, and I’m glad I don’t have memories with anyone else, and I’m glad my husband doesn’t have anyone to compare me to.”

Mariah Carey & Nick Cannon – Photo Credit: Maria M./Flickr7. Mariah Carey – R & B diva, Mariah Carey married her former husband, Nick Cannon, two months after meeting, and they waited until their wedding night to consummate the marriage.  Of her decision, Carey told Mirror UK magazine “I definitely don’t want to push it on anybody else. But we both have similar beliefs, and I just thought that it would be so much more special if we waited until after we were married…”

8. Leelee Sobieski – The actress, who’s married to fashion designer Adam Kimmel, once told Access Hollywood, “I guess 26 is kind of old to lose your virginity, but it was important to me that I remained a virgin until after I was married. It wasn’t for any religious reasons or anything like that, but simply because, to me, my virginity was the most precious gift that I could ever give to a man, and I wanted to be sure I was giving it to the right man.”

9. Tamera Mowry – Although Mowry and her husband Adam Housely did have sex out of wedlock once, they decided to wait until they were married to have sex again.  When the talk show host was on HOT 97 NY she spoke candidly about losing her virginity before marriage but said she decided to wait until she married to have sex again, which was three years later. “You may not understand this [but] I did it, then I felt guilty, then I became celibate until I got married

10. Sarah Drew – The Grey’s Anatomy actress, who married her college sweetheart, Peter Lanfer, waited until they married to have sex.  A fan on Twitter once asked the star of her TV character versus real life, “Are you as religious as April. How old were u when you first lost your virginity lol?” The actress replied, “I waited till marriage.”

11. Chelsea Noble Cameron – Former actress, Chelsea Noble, who is married to Growing Pains actor, Kirk Cameron waited until marriage to have sex with her famous husband of over 23 years.

12. Jessica Simpson – Although the sultry songstress and fashion designer, Jessica Simpson, had two kids out of wedlock with current hubby, Eric Johnson, she did abstain from sex until marriage with her first husband, Nick Lachey, back in 2002.

13. Missy Robertson – Duck Dynasty star, Missy Robertson, said she and her husband, Jase, were both virgins when they got married until their wedding night, vowing to do it “God’s way.”