When a child suffers the loss of a parent it’s a heartache oftentimes too difficult to bear, but when a mother or father is killed in cold blood the tragedy is insurmountable. Sadly, the following celebrities faced the pain of losing a parent to murder. 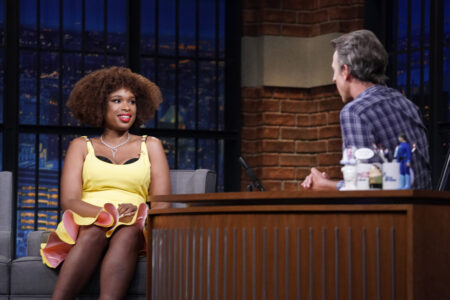 Jennifer Hudson during an interview with host Seth Meyers (Photo by: Lloyd Bishop/NBC)

1. Jennifer Hudson – In 2008, Oscar winner, Jennifer Hudson endured a horrific loss when her 57-year-old mother, brother, and nephew were murdered by her brother-in-law, William Balfour. Balfour went on a shooting rampage thinking his estranged wife, Julia Hudson, was seeing another man. Balfour was sentenced to three life sentences without the possibility of parole, served consecutively, followed by an additional 120 years for other convictions. Of her mother, the singer told CNN’s Piers Morgan, “My mother was a very wise and strong person. I feel like she raised us well, and she prepared me well, and so that’s what I live by.”

3. Sean “P Diddy” Combs – Sean Combs lost his father when he was 3 years old. Melvin Combs was shot and killed when he was 33. Combs opened up to Revolt TV and said, “My father was a hustler; he was a drug dealer… so I learned early in life that there’s only two ways out of that, that or in jail.” The media mogul revealed that although he doesn’t have a lot of memories of his father as he’s gotten older, he’s missed his presence in his life, especially regarding “manly” advice and celebrating things that would make him proud.

4. Charlize Theron – When Charlize Theron was 15 years old her father was shot and killed, in self-defense, by the actress’s mother. About her dad, Charlize Theron shared with Diane Sawyer what she remembered about him, “My dad was a big guy, tall, skinny legs, big belly… He could be very serious but loved to laugh as well, and enjoyed life. He also had a disease. He was an alcoholic.” Theron understood why her mother did what she did. “I know what happened,” she said. “And I know that if my daughter was in the same situation, I would do the same thing.”

5. Kelsey Grammer – Kelsey Grammer was thirteen when his father was murdered. Grammer was two when his parents divorced, and his father, Allen Grammar, remarried. According to reports, in 1968, Allen heard an intruder on the grounds of the lagoon-front home he shared with his second wife, Elizabeth, and their four children. Allen went to investigate and at age 38 he was shot dead. His assailant was a cab driver who was later tried and found not guilty by reason of insanity.

6. Dylan McDermott – Stalker actor, Dylan McDermott’s mother was murdered when he was five years old. Originally, her death was made to look like an accident, but after a police investigation, it was discovered that Diane McDermott was shot and killed in 1967 by her late boyfriend, John Sponza, who had ties to organized crime. Sponza was found dead just five years later in the trunk of a car.

7. Patrick Duffy – In 1986, Dallas star, Patrick Duffy’s parents were murdered by two teenagers, Kenneth Miller and Sean Wentz, during an armed robbery of the Boulder, Montana, tavern his parents owned. Wentz and Miller were convicted and sentenced to 75 years in prison. In 2001, Sean Wentz recanted his original story, admitting that he was the sole gunman and Miller was subsequently released on parole in December 2007. Of Miller’s parole, Duffy said, “My point of view is that he’s already been punished. You know, whether he’s in prison or out of prison.”

8. Paul Harvey – The late Paul Harvey was a popular conservative American radio broadcaster for the ABC Radio Networks. His father, Officer Harry Aurandt, was shot and killed while he was off duty. Aurandt and a detective were rabbit hunting in a rural area of Tulsa. When the officers returned to their car they were approached by four armed men. The detective attempted to fire his shotgun at them but it misfired. The four men started shooting at the officers while they were sitting in their car. Officer Aurandt died from his wounds two days later, and the detective was left paralyzed.

9. Gregg Allman – Gregg Allman, one of the co-founders of the popular 1970s rock group The Allman Brothers Band, also suffered a tragedy when his father was murdered. While the family was living near Norfolk, Virginia, Gregg Allman’s father was killed by a shell-shocked veteran he and a friend met in a bar and had given a ride to. Sadly, Allman’s life was derailed once again when his brother, Duane Allman, died in a motorcycle accident at the age of 21.

10. Michael Jordan – Michael Jordan Sr., the father of former pro basketball player Michael Jordan, was returning from a funeral in 1993 and pulled over on the Highway to take a nap. Daniel Andre Green and Larry Martin Demery spotted the car, a red Lexus SC400, which Michael had recently purchased, and shot Jordan to death while he slept and then stole the vehicle. His body was found in a swamp in Bennettsville, South Carolina. The perpetrators were sentenced to life in prison. At his father’s funeral, the NBA star tearfully addressed the mourners and spoke of the lessons he and others had learned from his father.