It’s been said many times that optimism is contagious, and with despair reaching record highs, many could use some of Meaghan Murphy’s dedicated cheerfulness right now. The Boss Mom intentionally sets out to find the “Yay” in life and she’s been able to parlay that message into her new role as editor-in-chief for Woman’s Day, a magazine designed to be a destination for celebrations big and small, where feel-good content like DIY décor, family activities, inspiring stories, and health advice are put through a fun filter. “…It’s really a party on every page, and a way to find joy in trying times,” Murphy tells Tinseltown Mom.

A bold storyteller, Murphy was poised for success early on. While studying acting and English at Rutgers University, School of the Arts, she used her confidence and determination to jumpstart a career that many would find admirable, however before plunging into the magazine world, she honed her artistic abilities by performing in commercials and off-Broadway theater. She also assumed hosting duties for various programs on MTV in the ’90s. You might recognize Murphy’s sunny face, from one of her TV appearances on Live with Kelly and Ryan, TODAY Show, Tamron Hall, The Dr. Oz Show, and Inside Edition. “I always loved performing and being transported somewhere else via a character, so that technique, that background actually comes in very handy because I am on TV quite a bit as kind of a lifestyle expert and hack master,” the New Jersey native, loving wife, and devoted mom to Charley, 10, James, 8, and Brooks, 7, shares.

Overnight success was not the title gifted to Murphy, as she scaled the ladder of victory through hard work and perseverance, qualities she possessed at the start of adulthood. At eighteen, she won an essay contest about overcoming adversity and gained national exposure. This feat earned her a coveted internship with the popular teen magazine YM, and while simultaneously studying in college, she worked as a reporter for a large New Jersey newspaper, The Star-Ledger. She eventually became a contributing editor for YM, which led to her becoming one of the founding editors for Teen People. “I was a little bit fearless and a lot…naïve,” Murphy explains. “I just didn’t know any different. I didn’t understand that I shouldn’t be doing something. I had no problem as an 18 or 19-year-old marching into the editor-in-chief’s office and being like, ‘Hey I wrote this quiz that I think could be a good fit for the October issue.’” 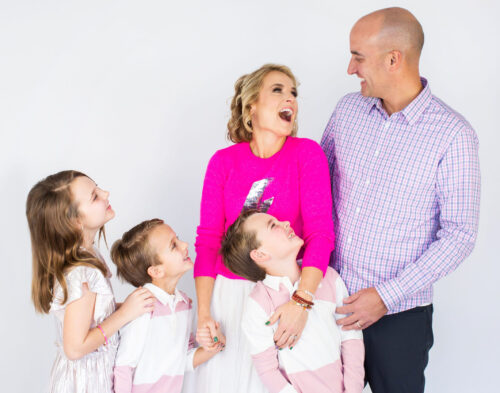 The determined high achiever took a short break from magazines when she became the lifestyle editor for a digital clothing brand, Delia’s, then later joined the creative team at Victoria’s Secret and helped launch the Pink line. Eventually, Murphy went back to her passion and helped unveil the short-lived magazine Lifetime, then became senior editor for Cosmopolitan. Continuing her career high, the certified trainer became the fitness director, then deputy editor, for Self magazine. Most recently, she was executive editor for Good Housekeeping for 6 years, then in March of 2020, at the beginning of a global pandemic, she assumed her role, virtually, as the content chief (and just recently, editor-in-chief) for Woman’s Day. “…They charged me with energizing it and reimagining it and we really have. We changed everything about the magazine. We changed the logo, kind of re-positioned it as destination celebration, no holiday left behind, from Taco Tuesday to Christmas…”

Murphy’s joy-filled approach transfers over to her new book, Your Fully Charged Life, which comes out on February 23rd. “…It’s a radically simple approach to having endless energy and filling every day with ‘Yay.’ That has been, basically, 20 years in the making. It is a science-backed guide, that road tests all the tips, tricks, and strategies I’ve learned as a journalist for the last 25 years, using myself as a guinea pig and it puts it to use in a practical ‘can do’ way that kind of functions from a place of ‘you’re not broken, I’m not going to fix you, but I bet you tomorrow could be more awesome, and one of these tips, one of these strategies is going to stick, and I’m going to show you how.’”

Her father’s untimely death, four years ago, from pancreatic cancer, put her on a path to finding the bright side of life. “His death stunk. It was like 5 months and gone. He was my person, and it was really hard to figure out how to move through that.” She started a campaign called Operation Good Grief, which was an exercise in finding one thing that didn’t suck every day. She did that for 2 years until it morphed into the “Yay List,” which turned into her asking the question, “What made you say ‘Yay’ today?” 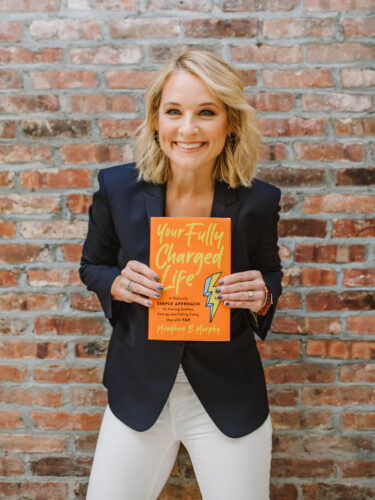 It’s hard to imagine, but Murphy was not always an optimistic person. “I’ve retrained my brain and transformed my life. My nickname was grumpy as a kid. …And it took a lot of work to understand that I didn’t need to live that way and now I live the complete opposite way… They’re simple strategies and once implemented, the change is so dramatic it’s hard to fathom anything else.”

In addition to being a wife, mom, magazine boss, author, and TV personality, Murphy co-hosts the podcast, Off the Gram, and while her life seems picture-perfect, it’s not without its hurdles. With the stress of COVID-19, she’s had to deal with medical anxiety, asthma, and social isolation but, with all of life’s challenges, she still continues to count her blessings.

Murphy’s upcoming book will be released on February 23rd, but pre-orders are available now on Amazon, Murphy’s website, and Penguin Random House.

For more on Meaghan Murphy please visit her at Meaghanbmurphy.com