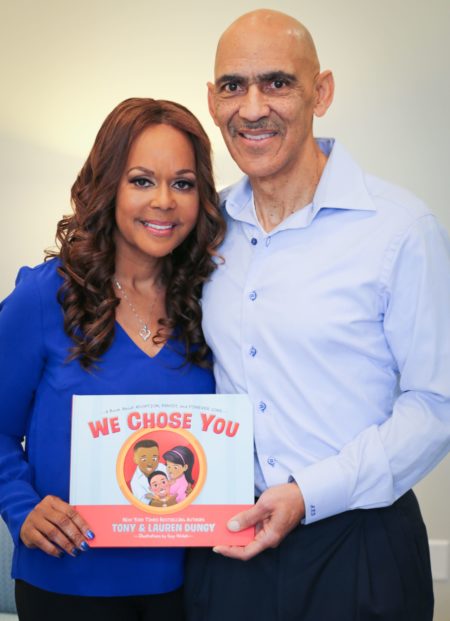 Former NFL player and Pro Football Hall of Fame coach Tony Dungy is well respected in the league. He’s currently a sports analyst on NBC’s Football Night in America, plus he’s an author of several books, including a #1 New York Times bestseller, but more meaningful than his professional highs is being a parent to 10 children, along with his wife of 37 years, Lauren Dungy. Lauren is also a best-selling author, an early childhood educational specialist, and Vice President of the Dungy Family Foundation, and together the couple have written marriage books, plus a host of children’s books.

We were overjoyed to discuss the Dungys’ latest, and third, book from Harvest Kids entitled, We Chose You: A Book About Adoption, Family and Forever Love, and thrilled to learn that they have an impending adoption on the way, that will make them parents to 11 children. “… We have a foster son who will probably be adopted within the month,” Lauren happily shares with Tinseltown Mom. He’s five-years-old and the kindhearted couple couldn’t be more delighted.

Adoption is a cause near and dear to the Dungys. In addition to loving eight adopted and three biological children, age range 3-18, they also care for foster kids. With this book, the couple seek to convey to adopted children that they have been specifically chosen to be part of their families, which is a special and forever bond and for Lauren, adoption was something that she’s experienced her entire life. “… I had always been around adopted family members. We have, kind of a legacy of adoption in our family. My grandparents as well as my parents adopted children and they did foster care, so I knew that we were going to adopt at some point in our lives.”

Tony acknowledges that adoption was not at the forefront of his mind at the onset of his marriage, but his heart quickly adjusted. “… as we grew in our marriage and heard more about the need for adoptive parents—we did a lot of public service work with the teams that I was involved in—and as you heard about the need, that’s when I became interested,” Tony emphasizes.

Given their big hearts, the Dungys seem the ideal choice to author a book about adoption. “Adoption is a story that needs to be told. All children want to hear about their journey. They want to know that they were loved and chosen and that they are special. We didn’t find a lot of children’s books when we were talking to our children about adoption, so we were really excited to write a story and talk about adoption through a child’s eyes. So that’s one of the reasons why we wrote this story, and children as well as adults can learn from it…,” Lauren says. 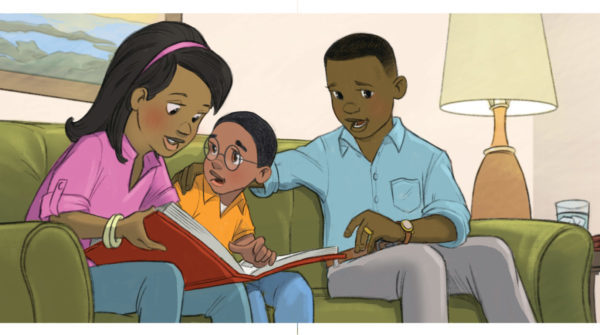 In the book, a young boy named Calvin explores his family history. He is tasked with a school project that involves getting information from his parents about his adoption journey. He discovers they were praying for him long before he was chosen, and that God selected his parents for him. It wasn’t by chance, or accident. It was according to God’s plan. Even though his parents had already shared his adoption journey with him he was excited to hear it again and he wanted to be reassured that he was special and loved. “The answers that the parents gave to Calvin is very much the message that we gave to all of our kids, that God had a plan for you, it wasn’t an accident that you’re in our family. Yes, you didn’t come in what would be quote ‘the normal way’ but it was still God’s way of putting this family together and so the messaging was definitely what we try to get across to our kids,” Tony says. Lauren adds.“We Chose You was written to communicate to all children, whether birthed or adopted, that they are chosen. That they are secure. That they are loved. A message every child needs to hear.”

So, when is the best time to tell a child they’ve been adopted? “…It should be just a natural conversation, age appropriate. So many parents wait for that perfect time, that perfect age and I don’t think that they should wait until they’re older. They need to hear it at a very early age, hear the word adoption and know that it’s normal and there’s nothing secretive or bad about adoption. We had a conversation earlier today and the gentleman said that his nephew was a teenager and he still hadn’t been told that he was adopted, and that’s a mistake to wait that long. I mean, why would you wait?” Lauren emphasizes. Tony adds, “That’s kind of the motivation for writing this. A lot of people know we have adopted children and they ask us, ‘well how did you tell your kids?’ or ‘when did you tell them?’ So, we write a story that just says that it’s very easy to tell them very naturally…” 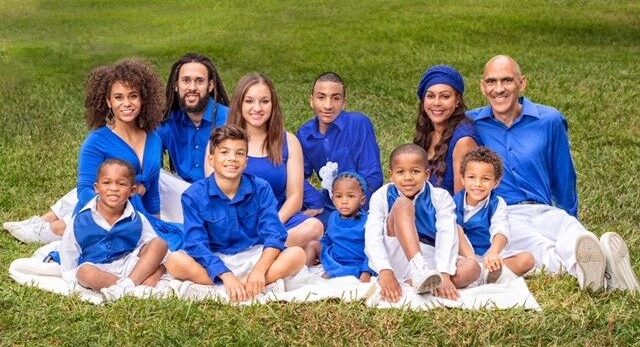 Since the Dungys have such a large family we were curious to know how they ensured each child got quality time with their parents. Lauren says you have to be very intentional and elaborates further. “…Maybe just as simple as I’m going to the grocery store and you take one child with you and that child gets all of your attention. We often do that, or going to run an errand and then you pick one or two. It’s important because they do need that time when they don’t have to compete with their brothers or sisters… So, we do have to be careful and make sure that they do get that quality time. We have to work at it because it’s very easy to do everything in groups. …they don’t mind sharing, they don’t mind that we’re a large family. They celebrate that, but they do want that special time one on one.”

The Dungy’s also regularly go into Title 1 Schools to read to students. “…we utilize a lot of the books we read to go into elementary schools in Tampa where we live and read to the second-grade students, just try to encourage them to read, give them good role modeling and it’s something that’s been very important to us,” Tony shares.

Lauren adds, “… Many times children, especially that young age, they want to be entertained. They want the toys or the TV to do something for them, but we want them to use their own imagination and we tell the kids that they can travel anywhere in the world without leaving their desk or without leaving their bedroom when they open a book and read. And so we do read to them and then before we leave we give them a book to take home and sometimes it’s the only book that they have. It’s their own book to keep so they treasure that gift and we hope that we’ve inspired them and encouraged them to read.” 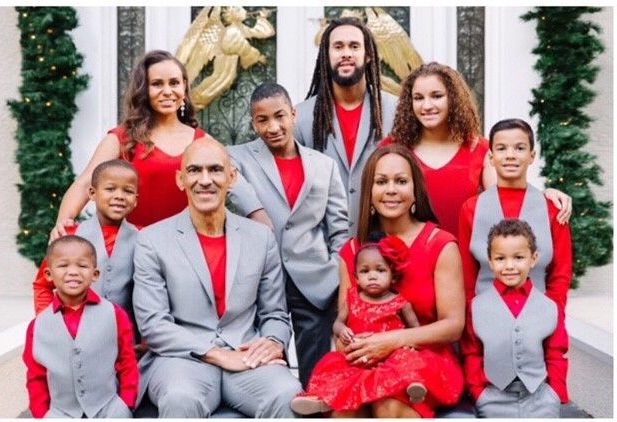 With their focus on emboldening young minds to read, we asked how they encourage their own kids to read versus spending time on technology? Lauren says, “Well, you know you have to model that. I love to read so it’s easy for me, so if our children see us reading then they’re encouraged to do so also. So, in the evenings after dinner, oftentimes once homework is completed, we’ll all read. I know they’re required at school to read so that helps. We have the teachers supporting us.” The couple say that they try to read together as a family as much as possible, which inevitably ensures quality time is spent together, while encouraging good reading habits.

The Dungys continue to showcase their love for children and highlight their desire to make a difference in the lives of young minds. Their work, comprised of picture books for kids aged 6 – 9 (first grade to third grade), tell meaningful stories that will inspire children and teach important lessons about family, love, character and integrity. Their upcoming book will focus on forgiveness, a virtue we can all benefit from. Tony says, “… that brings it back to our theme, we have these series of books about Team Dungy. Lauren and I are coaches and we help the young kids on our team work their way through life situations and life lessons. This one is about a basketball team where one of the players thinks he’s the star and hurts a lot of people’s feelings. They have to decide whether to forgive him or not. It’s really a message to kids about doing the right thing and being good teammates and also being able to forgive people that hurt your feelings.”

To purchase the Dungys’ new book, We Chose You: A Book About Adoption, Family and Forever Love, or any of their other books be sure to visit Amazon.com.