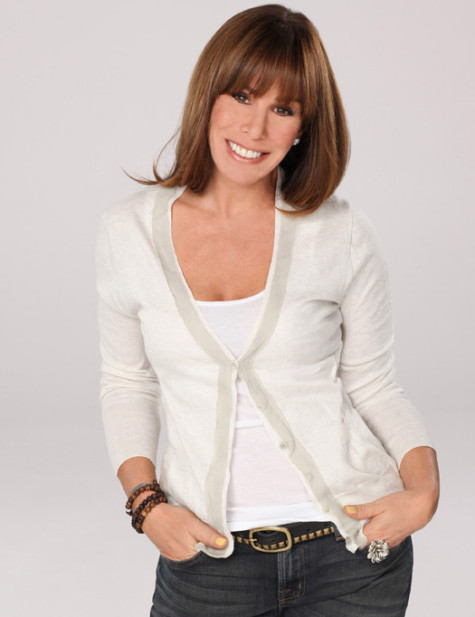 Being the daughter of comedic legend, Joan Rivers, has its benefits, but it also has its share of challenges. When a child is expected to follow in the footsteps of an ultra successful parent it’s a heavy load to carry. But, for Melissa Rivers she’s accepted the responsibility and has established quite an impressive résumé for herself, maybe not on the front lines like her famous mom, but definitely behind the scenes.

Having had to battle a number of difficult seasons in her life including: her father’s suicide at age 18; a period of estrangement from her mother, and self-esteem issues growing up, this ambitious talent has managed to rise above the hardships.

After graduating college, Rivers started out as an intern for CBS News, then became a feature reporter for CBS This Morning, and with her drive and prowess she slowly proved her worth as a compelling force in Hollywood.  She’s an accomplished producer with a number of  credits under her belt including, several red carpet events, her reality show, Joan & Melissa: Joan Knows Best?, and E!‘s popular, and oftentimes controversial show, Fashion Police.  It was our pleasure to speak with Melissa who talked about everything from nepotism, to funny moments, to leaving a family legacy.

When you look back on your life, your father’s suicide, estrangement from your mother, self-esteem issues what thoughts cross your mind?  I think what really crosses my mind is, ‘I wonder what my dad would be thinking. I wonder what advice my dad would have given me.  Would I have made different decisions in my life?’ Overall, I think he’d be pretty pleased.  I mean, I managed not to become a serial killer.

How would you view yourself back then versus today?  Oh, that horrible old adage, If I knew then what I know now…

Do you feel more confident in who you are today?  No, I still feel like an 11th grader. I’m still riddled with insecurities.

Is it due to the pressures that the entertainment industry inherently brings?  I think the environment can very much be a part of it, but I think I’m just hard-wired that way.  I think that’s what keeps me driven.  I am by far my worst critic. 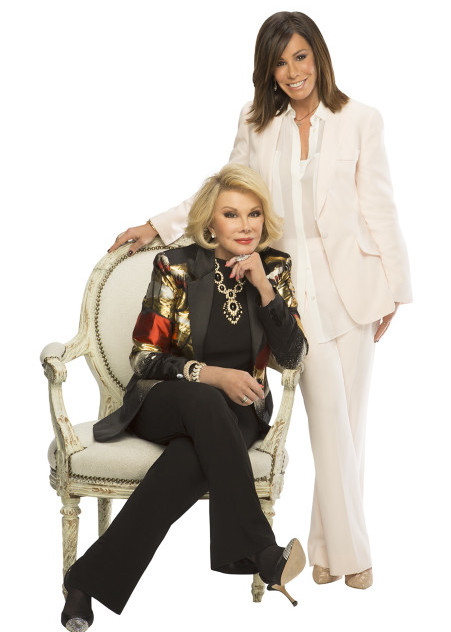 Speaking of entertainment.  You and your mother work so well together, even when you seem annoyed with her.  Your relationship, even in front of the cameras, seem so genuine.  It has it’s moments. (Laughs) I think that’s what makes the teaming work, especially during the height of the red carpet. It’s a different dynamic when you have co-hosts who are related because I can react and say things and make expressions that anyone, if it wasn’t your parent, would consider rude. Because the mother/daughter dynamic is so universal, and, it’s really not just mother/daughter, it’s relative… That familial dynamic is just so different. Then you throw in the humor that our family has, and the rhythm that my mother and I are able to work off of each other.

The rhythm is definitely there.  Does your mother keep you laughing? People always ask, ‘Is your mom funny at home?’ And my answer’s always, ‘yeah, yeah it was hilarious when I was sixteen and getting grounded.  That was a knee slapper.’  Yeah, I think my mom is funny, but it’s not the funny you would expect, where you make each other laugh.

You’re not at home all day telling jokes to each other.  No, but my son, Cooper, is really funny.

Does Cooper have that comedic gene?  One hundred percent.  My dad was funny.  My humor is much closer to my father’s than my mother’s, more of a dryer humor.  And, Cooper’s is more like my mother’s.

When you saw your mom walk out on that CNN interview what was your reaction?  I think my reaction was like, oh man here we go.  She was right.  She was really pissed.  And what’s been amazing is the outpouring of support, especially from other comedians who are like finally someone is saying, “Stop being negative. We’re comedienne’s; we’re here to make you laugh. I’m not going to apologize. If you don’t think it’s funny; don’t laugh, move on, it’s a joke.” 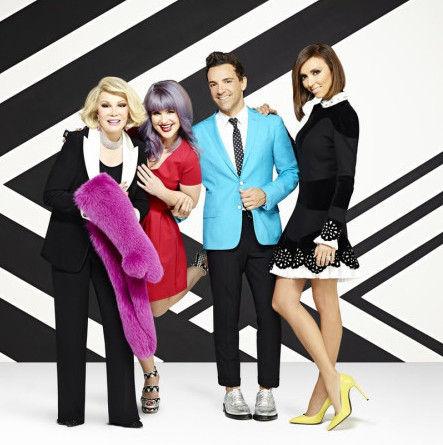 Even on Fashion Police.  The goal is to critique fashion, but some people end up getting offended.  It’s not a character assassination.  We’re not like ‘this is a bad person and here is why…’ If we don’t like one of the three hundred dresses you’ve been given for free, and of the twenty that you’ve worn on your press corps… and we don’t like one?  You’re making twenty million dollars a picture.  Seriously, relax… You didn’t take the curtain down and stitch the dress by hand.

Fashion Police is so successful and has been around for eleven years now. How did the show come about?  It started back on the first version of the show, back when we originally started the red carpet, which feels like two thousand years ago.  Then while I was with E! I started producing little by little. Then I was also producing on the red carpet and it all just kind of evolved.

People assume nepotism, but you’ve actually proven yourself and have risen to success on your own merit.  What people don’t realize is that I’ve had so many jobs that have not been with my family.  I started as an intern.  The thing with Hollywood, with that kind of stuff, is that it might get you the meeting, but it’s not going to get you the job.  And part of the thing that I’ve always run up against is the preconceived notions.  If somebody doesn’t like your parent they automatically take it out on you, without realizing it.  Everyday is an uphill battle for me.  If I hear one more time, “Oh, it’s only because of your mother.” That’s why I don’t read a lot of social media and things said about me.  And, I’m like, ‘Really? Do you need me to post my resume online?’ I get it on a daily basis.  But, at some point you have to stop listening and let your work speak for itself.

You often speak of your parents creating the most normal life possible for you and that’s what’s kept you grounded.  One hundred percent, and I try and do the same for my son.  It’s not like I shield him, it’s a definite delineation between work and home.  Understanding that the entertainment business is our job, and it’s no different than anyone else’s job.  Yeah, it’s a strange job, but it’s really a job.  His friends have parents that are lawyers or doctors and they go to work everyday and they usually do more work at home, and that’s it. Cooper’s friend’s parents, who are surgeons, are not running around operating in the basement.  Even with the reality show, he was not allowed to miss school or games or practices because of it.  The four seasons that we’ve done so far he’s probably missed three or four events because of it, but he’s never missed a day of school.

He’s thirteen now. Is it harder now that he’s a teenager?  Like I said when Cooper started middle school, I didn’t like it then, and I’m not sure why I’m being forced to relive it again.  There’s something so wrong with that.  I was not a happy teenager.  I know that boys and girls are so different and girls are harder, but I think that boys are a little harder because at least girls, they scream and yell and mope and cry when they come home, and you know what’s wrong, but with boys you just get, ‘What’s going on?’ “Nothing.” ‘How was your day?’ “Fine” Well, that’s giving me a whole lot of insight. (Laughs)

You had him in December and was back on the red carpet in January.  A lot of moms say how hard it is going back to work after having a baby.  Did you find that was an easy transition for you?  This is where the entertainment business is great.  I can take him to work with me. I actually was back to work three weeks after I had him.  I had to finish a show that I was producing and hosting, which was about having a baby.  And, I had to finish the show by the end of the month, so I had to go right back to work right after New Year’s.  So, the good thing about my job and my business is when I went back to work on the red carpet I had Cooper with the baby nurse in the dressing room.  Then I went on air and came back.

Would you encourage or discourage a career in the entertainment industry for him?  I don’t know.  I want him to do something, it sounds so cliche, but… that makes him happy.  He’s at the age where I’ve tried to explain to him, in a weird way, that there is a family legacy, so whether he goes into the entertainment business or not there is a certain standard that I expect him to live up to.  In any profession.

Do you think that it’s harder for kids who have parents in the industry, to follow in their footsteps?  Well, I live with that on a daily basis. And, that’s why I think I’m trying to show him that it’s not about what you choose to do, but it’s about doing your best, and making the effort, no matter what field you go into.

Your parents seem to have instilled a strong work ethic in you at a young age.  Very much so, and that was them making sure I was grounded in the sense of, we live in this crazy environment but it really has nothing to do with reality.  My mom is eighty-one, and my son and I were talking about our family legacy, and the legacy is really the work ethic. And that’s what I really expect of him, no matter what career he goes into; it’s the work ethic.  That’s the family legacy.

Do you have any parting words for all the moms out there?  Being a mom is fun, don’t lose sight of that.  Our kids are hilarious.  My son does something that makes me genuinely laugh every single day. And that’s the important thing that I always hold on to.