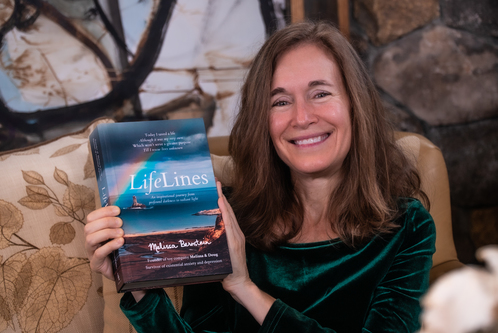 In you’ve been a parent within the last 30 years then chances are you’ve purchased a Melissa & Doug toy product for your kid at some point in their childhood. Melissa Bernstein, co-founder of the popular toy brand, alongside her husband Doug, will celebrate 33 years as a business this year. And, while the company was providing laughter and learning to many, privately, Bernstein was suffering some dark days, filled with anxiety, depression and despair. “Part of my badge of honor became this sense that I couldn’t ask for help. I had to do it myself, I became an utter and complete martyr…” Bernstein tells Tinseltown Mom.

Decades before the mompreneur reckoned with her struggles, she was an ambitious young dreamer, envisioning a grand career filled with promise. “From age ten, I determined that I was going to be an international lawyer, and I wanted to become fluent in another language…I was going to go to Columbia Law School, which was #1 for international law at that time.” Moving towards her goal, she graduated from Duke University with a major in public policy studies and Japanese language. During the process, she realized law was not her true calling, so she took an investment banking job, with the prestigious Morgan Stanley, as a financial analyst. “For about three days, I basked in the glow of feeling like, ‘I made it,’ until I actually started the role… I saw how my brain, for whatever reason, could not utilize numbers in the way it utilizes words and notes and my creative channels. Numbers were just boring old numbers staring up at me from the page. And I couldn’t work magic with them. I didn’t understand them. I felt like a flower without sunlight and water.”

At 22, after a year of working and feeling like she could barely breathe or get out of bed each day, the young creative’s boyfriend at the time, Doug, who worked successfully in advertising, gave her the courage to step “off that conventional treadmill” and start a toy company together.

In 1988, their business, originally called Lights, Camera, Interaction! Inc was officially birthed, and the couple began by producing children’s videos. “We thought we would combine our talents, because I wrote music: verses, lyrics… and Doug had produced television commercials, so we thought ‘what would utilize both our skills?’ We decided to create something that had never been done. These programs for kids that would get them off the couch, get them moving and only had children in them. They would be children guided, live action with real kids, and really no one had done that. We were at the genesis of that movement…” 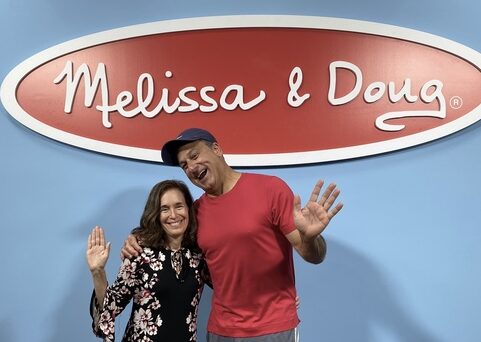 Three years later, after video retail sales seemed impossible, the duo decided to create a toy product, a set of fuzzy puzzles: fuzzy farm and fuzzy jungles, and for more than a decade, they focused on creating over 1000 styles of wooden puzzles. Today, since Melissa & Doug’s inception, the company have created over 5,000 children’s products and sold billions of dollars of toys.

Their mission is to provide a launch pad to ignite imagination and a sense of wonder in all children so they can discover themselves, their passions, and their purpose, and even today that goal remains, setting them apart from other top toy manufacturers. “We’re very different than them too. Throughout our tenure, we really haven’t been as much about the hot properties, and the licenses, and the TV-advertised toys. We’ve been much more about the power of open-ended play,” Bernstein says.

A mother to six, ranging in ages, 13-27, the creative entrepreneur, who had two kids in her twenties, two in her thirties and two in her forties, has recently been transparent about her mental health struggles. “I knew it from the moment I was born. My affliction existed from birth. I have something called existential depression, which is an utter and complete crisis of meaning, really not knowing why I’m here, what the meaning of life is, and my purpose while I’m here…” 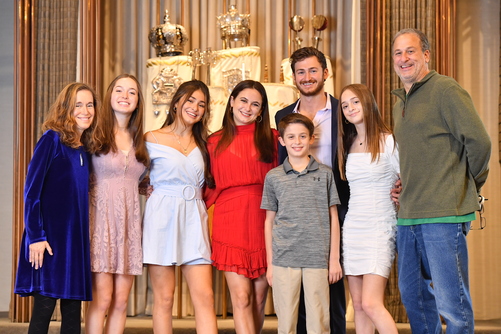 For years, the business mogul kept her mental health struggles at bay and didn’t get professional help until about four years ago. She reveals that she wasn’t broken enough. “… Like many women I kind of fell into a role of… ‘a pleaser needing to be perfect’ …from early on that I followed right into my middle life and, basically, admitting I was flawed and needed help was part of perfectionism. That was actually viewed from me as weakness. …I needed to serve everyone around me with a smile no matter how exhausted I was and check everybody else’s needs off the list and never serve my own. So, I think martyrdom, when I talk to mothers and entrepreneurial women… is the affliction that resonates the most… I feel like it’s the least understood. Because I think most of us don’t realize that martyrdom means what you think you’re doing is serving selflessly, because you really want what’s best for your family and everyone around you, and you want to be there for them and serve their needs. But in the end, you’re actually doing it for ego validation, and to be praised because it makes you feel like you belong and you’re a better person, and when you don’t get it, which I ultimately did not get that praise that I so needed, you become extremely bitter, exhausted and resentful.”

Out of Bernstein’s suffering she birthed a book, LifeLines, with the hope of helping others along their journey. It also features her story, as well as three of the “lifelines” that saved her: the rhyming verses that have been filling her head for decades (many of which became her mantras), her deep connection to nature (depicted throughout the book with awe-inspiring photography), and stories of how she wrangled her pain into positivity through the act of creating toys.

From the publication of LifeLines, she and Doug, whom she’s been with for 36 years, started an online community, resource center and content hub located at LifeLines.com. “It’s our second beautiful venture together and he has always been by my side in everything. We wanted to do something to give back because we’ve been so fortunate in 32 years of Melissa & Doug. And people have blessed us with so much goodness that we wanted to offer an entirely free community where people could find communion with like souls…”

For more on Melissa Bernstein and the LifeLines community, or to purchase her book visit LifeLines.com.