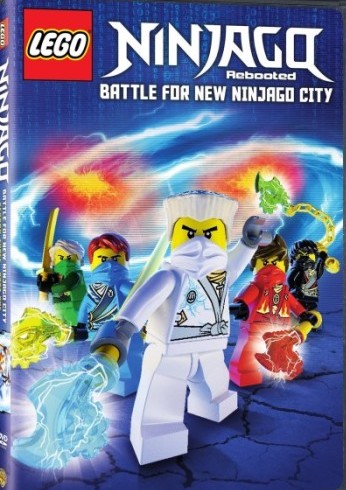 If you have a Ninjago fan in the house, then season three is sure to make them happy.  The writing is so clear and concise, and the characters so rich and dimensional that you don’t have to enjoy the first two seasons to be entertained by this series.  The only complaints that you might receive from the little ones, is that there are only four episode and they go by way too fast. Read the full synopsis below.

Victory in the Final Battle between the Gold Ninja and the Overlord has ushered in a new era of peace and begun a technological renaissance. Time has passed and the Ninja have become obsolete in this new hi-tech world. Just when they think all is safe in Ninjago, they’re called back into action when the reclusive inventor Cyrus Borg warns them the Overlord has survived as a digital virus and is trapped within the Digiverse.  The Ninja will learn the Overlord seeks to steal Lloyd’s golden power to enable him to escape his digital prison and reign as the great prophesied destructor, “The Golden Master.”   And to aid his villainous plot, he’s created a new technological menace more powerful than any foe the Ninja have ever faced – Nindroids.

*Disclaimer: Although I did not receive monetary compensation for reviewing this product I did receive a free DVD from Warner Bros. Home Entertainment for the sole purpose of this review.*

Studies have shown that pornography can have devastating effects on people's lives, leading to infidelity, lewd behavior, sexual exploitation, … END_OF_DOCUMENT_TOKEN_TO_BE_REPLACED

According to Business Insider, podcasts have been surging in popularity over the last few years. Consumers are continuing to partake in this digital … END_OF_DOCUMENT_TOKEN_TO_BE_REPLACED