Julianne Moore was on The Tonight Show with Jimmy Fallon on Friday and shared some funny stories about her family dynamic.  She started off by telling Fallon that her kids were doing great and are “really big,” to which Fallon proceeded to ask who the good/cop bad/cop was between her and her husband.

“…I’m the least fun one. I’m the one that does the dental appointments, and that kind of stuff. Yeah, they call me prison business…,” the actress joked. “…he’s the coach, director of entertainment and food services.” Moore continued. 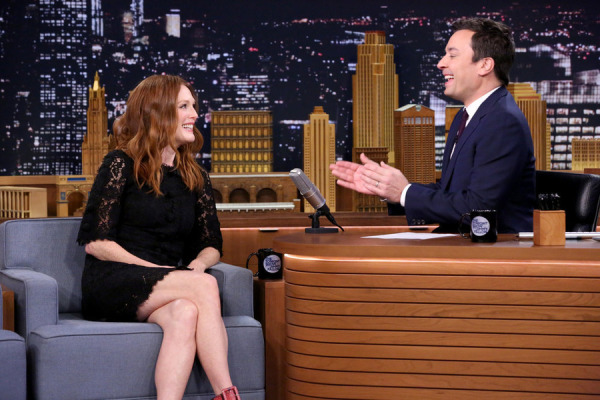 The 53-year-old, who has a 12-year-old daughter, Liv, and 17-year-old son, Caleb, with husband, Bartholomew “Bart” Freundlich, shared how she and her family do group texts, and even Caleb’s, girlfriend, Charlie, will often send photos of him playing basketball.  “We were in a group text the other night…”, the actress proceeded to explain. “…and I brought in a really funny text,” she giggled.

See the exchange below, in which Caleb thought he was sending the following message to his girlfriend:

Caleb: Can I come see my baby now?

Caleb: What I meant to say was I checked my card and the money’s not on it but I’m sure it will be on later today

Julianne: Hahahahahahahah Yes I am sure the money will be in later. Baby.

Watch the funny clip below!

Whether you're a celebrity or not, choosing to be a stay-at-home mom is an important, yet tough, decision to make. These celebrity mothers made the … END_OF_DOCUMENT_TOKEN_TO_BE_REPLACED