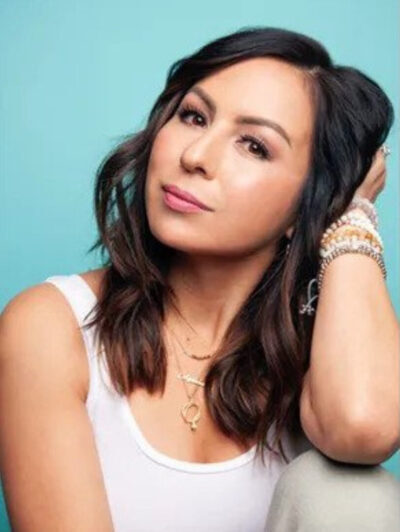 Anjelah Johnson-Reyes is known around the world for her clean comedy and hilarious storytelling, but it’s her comedy sketch “Nail Salon” that put her on the comedy map. But, before becoming the viral sensation that catapulted her career, the expectant mom had dreams of Hollywood while growing up in San Jose, CA.

After securing a spot as an NFL cheerleader for the Oakland Raiders, Johnson-Reyes took that as her sign to move to La-La land a year later to pursue an acting career. The comic often talks about that free comedy class that she signed up for at a Hollywood church. Her star performance was a hit and led to several guest starring television roles. Now she’s selling out comedy venues around the world. But, even with the glitzy lights, cameras and fame, there’s always a backstory. “…I talk about it in my book, about the trauma in childhood that I experienced, but I think overall I had a good childhood,” Johnson-Reyes tells Tinseltown Mom.

In the comedian’s 2022 memoir, Who Do I Think I Am?, she explores topics such as race, dreams and faith, but it’s chapter three, where she unpacks past trauma, that stands out the most.

The author says that she gets her personality from her jokester dad but admits that he was scary growing up. “…He had a temper; he had rage,” the actress says quite honestly.  “… My dad is very competitive… he always wanted us to be the best, and I’m grateful for that, what he instilled in us…but it came with a very violent, rageful price tag… My dad was physically violent and just scary to be around. We were on eggshells. You never knew which dad you were going to get, like cool dad… or, there’s the dad who was in a bad mood who was punching the doors off the hinges…,” the actress reveals.

Today Johnson-Reyes and her dad have a great relationship and after years of therapy, she’s thinking about how her own parenting style will unfold. In December, the 40-year-old took many by surprise, after years of saying no to kids, and announced that she was pregnant. “I’m so grateful that my child will have a different childhood… My child will have an invested father who is so loving and so wonderful and has such great character and can communicate feelings and process feelings and emotions…,” she shares through tears. 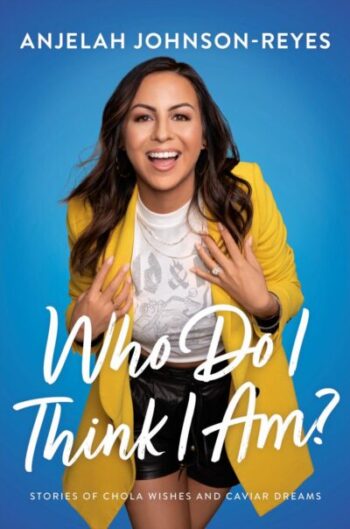 The performer and her husband, musician Manwell Reyes, were happy traveling the world and pursuing their careers full throttle, without the prospect of children, but something changed. “…We didn’t want kids. I felt like my career was always my baby, this dream of mine to be an actress was always the thing I nurtured and wanted to see grow. To me, having kids always felt like a consolation prize. It felt like, ‘Oh I don’t get my dream, so I’ll have kids.’”

It wasn’t until 2020, when the world was quarantined at home and filming and production shut down that Johnson-Reyes’ passion shifted. “…I loved being home, being off the road. I didn’t concern myself with auditions or the next gig or anything like that… and it was the first time that I felt like, ‘I don’t want to go back… if I never book another acting role, it’s fine. I don’t want to tour the way that I use to tour. I still want to be a comedian, but I don’t want to hustle and grind the way that I had been,’” she reflects.

Suddenly, the dream that she pursued since she was young didn’t seem quite as rewarding as it once had. “…And it was the first time that I felt like my career that I put #1 in my life for so long was not as fulfilling as I thought it was… I was like, ‘Oh shoot, did I mess up? Should I have had kids?’ Because I’d been treating this career as my baby thinking it was going to fulfill me in so many ways, and it actually has not,” the star says.

That question propelled a quest to find out about her chances of conceiving. After doing blood work she discovered that she didn’t have a lot of eggs and her levels were really low, so if she wanted to do anything about it, she’d have to “hurry up.” Even with that bleak outcome she still wasn’t convinced that she wanted kids, but she started the process of saving her eggs. She began IVF but was presented with challenge after challenge as viable eggs were dwindling down and the eggs, she started with, weren’t growing. “The more that I kept getting bad news, I think the more it was a wakeup call of what I really wanted but maybe was afraid of. And I think that’s when the switch happened from me wanting kids….” At 39 she had her epiphany that being a mom was something that she truly wanted, but what about her husband? “It was a slower journey for Manny, but he was in full support and came on board,” the comedian reveals. 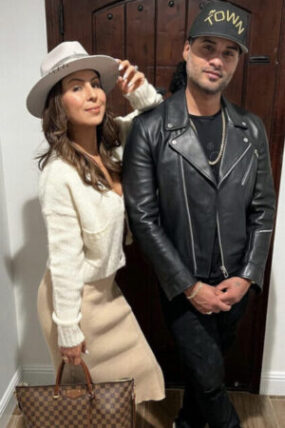 Through the IVF process she learned that she had large fibroids in areas that would prohibit her from getting pregnant. She had surgery to remove the fibroids and that’s when she also discovered that she had endometriosis (a painful disorder in which tissue similar to the tissue that normally lines the inside of your uterus—the endometrium—grows outside your uterus), so after surgery there was a 4-month waiting period before she could get pregnant because her uterus was vulnerable. This was all within a couple of weeks of her book launch and 80-city tour launch. Finally, in October 2022, her calendar showed that she had an upcoming month off, so she planned to do IVF again in November. “By mid-October my period was late, and I was like, ‘Wait a minute, hold on,’ and I ended up getting pregnant naturally before I did my next round of IVF.”

So, with the miracle of a baby filling her life, where does the entertainer see her career shifting, now that she’s done trying to prove herself? “I’m looking forward to my world changing and I don’t know in what way. But I know that I’ve been touring and chasing after my dreams in my career for 16 years now… so I’m ready for a change…”

Judging from the way the comedy legend’s life has unfolded so far, it’s safe to assume that her next chapter, motherhood, will be filled with satisfaction. “I feel like this baby is going to bring me what my hustling would never have been able to bring me.”

For all things Anjelah Johnson-Reyes, including her book (which will be available in paperback on March 14th), podcasts, tour dates and merch, visit www.Anjelah.com