According to the National Institute on Alcohol Abuse and Alcoholism, more than 5.3 million women ages 18 and older have an alcohol use disorder. Approximately one in two women of child-bearing age drink, and 18 percent of women in this group binge drink (five drinks per binge, on average). It goes without saying that excessive drinking can have devasting effects. High-risk drinking, defined as more than three drinks in a day or seven in a week for women, is on the rise among women by about 58%, according to a 2017 study.

These famous moms admitted to past alcohol struggles. Below are their stories.

1. Jessica Simpson – In her upcoming memoir, Open Book, Jessica Simpson revealed to People her struggles with pills and alcohol. The singer shared that she hit rock bottom in 2017. She was on her way to a school assembly with her husband, Eric Johnson, and recalls, “It was 7:30 in the morning and I’d already had a drink.” Simpson said she was killing herself with pills and alcohol and sought help with her sobriety in late 2017. “I had room for so many wonderful moments that I would have missed: sober for the first time ever in my studio and seeing Maxwell grab a guitar. Ace in pajamas he put on himself, proudly adding a sticker to his bedtime chart. …There’s no better gift I can give my kids, there’s no better gift I can give my husband. More importantly, there’s no better gift I can give myself.”

2. Edie Falco – Actress Edie Falco struggled with alcoholism and became sober in the early 1990s after “one particular night of debauchery.” She told The Cut that it was difficult to be around the hard-partying cast of The Sopranos, admitting, “This cast, in particular, they really love to hang out and party. They make it look like fun. And it was fun for me! They spend a lot more time without me than with me, by my own choice. I’m always invited, and I’m always there for two minutes and I leave, because I can’t live in that world anymore. It’s too dangerous.”

3. Mary Tyler Moore – Mary Tyler Moore was vocal about her alcohol struggles. Even with a type-1 diabetes diagnosis, the actress kept drinking. “…though my blood sugars were erratic, I sure drank consistently every evening at six o’clock. …Some part of my brain functioned well enough, however, to get me to the Betty Ford Center, where in 1984, over a period of five weeks, I grew up some,” the late star wrote in her memoir, Growing Up Again. Moore admired Betty Ford, the former first lady and founder of the clinic where she, and many others, got treatment. “You see, at that time… many women felt that being a female alcoholic was a disgrace, the lowest of the low and that an intelligent, well-read, dignified woman couldn’t possibly be a drunk.” She said Ford “was, first and foremost, a lady (kind, well-mannered, gracious), anything but the commonly held image of an alcoholic woman.”

4. Betty Ford – In 1978, Betty Ford, wife of former President Gerald Ford, was admitted to a California hospital for alcohol and drug abuse. In a statement read by a family spokesperson she said, “I have found I am not only addicted to the medication I have been taking for my arthritis but also to alcohol.” When Ford recovered, she established the Betty Ford Center to help others overcome substance and alcohol abuse.

5. Carrie Fisher – Beloved actress Carrie Fisher was also vocal about her alcoholism and drug addiction, and in 2008 Fisher published a book called Wishful Drinking, opening up about her painful journey. Before her death, the actress was in and out of drug and alcohol rehab since she worked on the Star Wars series. She says, “I realized I was doing a bit more than other people and losing my choice in the matter.” She also has not shied away from talking about mental illness and her battle with bipolar disorder.

6. Elizabeth Taylor – Hollywood legend Elizabeth Taylor battled alcoholism and drug addiction. ”Not being a drunk is the only way I’m going to stay alive,” she read from her journal while getting treatment at the Betty Ford Center. ”Drunk is a hard word, but I’ve had to be hard with myself to face it. A drunk is a drunk. Somebody who drinks too much is a drunk. Somebody that takes too many pills is a junkie. There’s no polite way of saying it.” In 1983, the late actress had been hospitalized due to a bowel obstruction and it was during that hospital stay that her family staged an intervention.

7. Amber Valletta – Model and actress Amber Valletta was addicted to drugs and alcohol and revealed her dependence began at just 8 years old. She told Mind Body Green, “I sniffed markers, I sniffed glue, fingernail polish, anything that could give me a buzz … then I found drugs that were around the culture of my family.” As a successful model, Valletta said she had a multi-million-dollar deal and showed up to shoot a campaign high and drunk. She said she even showed up to her uncle’s bedside when he was dying, high, drunk and looking for a place to do drugs. Valletta got sober at 25 because, “I didn’t want to die.”.”

8. Kristin Davis – Sex and the City star Kristin Davis has been open about her alcohol addiction and believes it is a disease. She told Health.com, “I’m a recovering alcoholic. I’ve never hid it, but I’ve been sober the whole time I’ve been famous, so it wasn’t like I had to go to rehab publicly.” 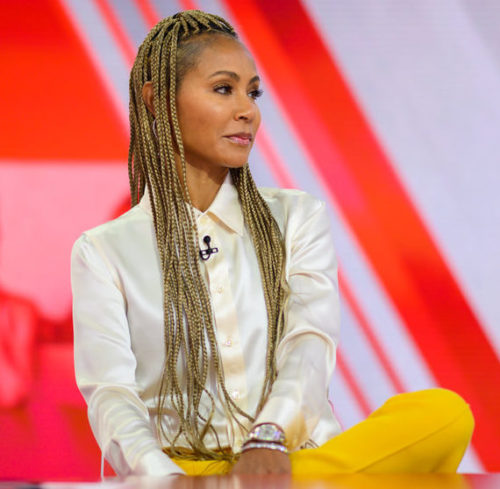 9. Jada Pinkett Smith – Jada Pinkett Smith opened up about her alcohol abuse on an episode of her Red Table Talk show. “I was in the house by myself and I had those two bottles of wine and was going for the third bottle and was like, now hold up, you in this house by yourself going for your third bottle of wine? You might have a problem. …So, I went cold turkey,” the actress continued. “I am a binger and I always have to watch myself and how I can get obsessed with things.” The talk show host has a family history of drug and alcohol abuse and admitted that her own addictions jumped around, from a sex addiction to a gym addiction.

10. Mary J. Blige – On VH1’s Behind the Music, actress and R & B singer Mary J. Blige spoke about her struggle with alcohol. At the time she said, “It was bigger than me, and it was definitely going to kill me. So I was like, this is it, and let’s go. I remember sitting on my bed. I swear, I don’t know what death feels like, but I felt like my spirit was trying to leave my body.” Her ex-husband, Kendu Isaacs inspired her to get sober. “I stopped drinking,” she says. “It was will power. It was prayer. It was really hard…”

11. Drew Barrymore – Drew Barrymore was addicted to drugs and alcohol as a child. In her autobiography Little Girl Lost, published when she was only 14, Barrymore wrote, “I had my first drink at age nine, began smoking marijuana at ten and at twelve took up cocaine.” The actress entered rehab when she was just 13 years old. After a suicide attempt at 14, her mother sent her back for treatment and afterward, she spent three months with musician David Crosby and his wife Jan Dance, both substance-abuse survivors. Crosby told PEOPLE, “She needed to be around some people that were committed to sobriety.”

12. Patricia Heaton – In 2020, Patricia Heaton told Parade magazine that she had quit drinking two years prior. “…I noticed that I was looking forward every night to cocktails. And if I happened to go to lunch, I might have a glass of wine or Prosecco. There’s an actual statistic that women who were moderate drinkers in their 30s and 40s often become alcoholics in their 50s and 60s.” In 2021, the beloved actress posted on her Instagram page that she was celebrating three years of freedom from alcohol.