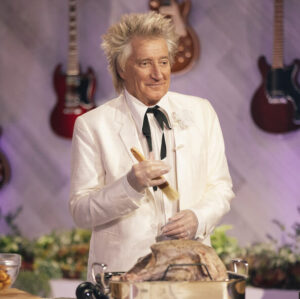 1. Rod Stewart – The Australian rocker was “17 or 18” when he found out his girlfriend became pregnant, and they chose to give their child, Sarah Streeter, up for adoption.  In an interview with CNN, Stewart said that since Streeter’s adoptive parents died he’s been trying to build a relationship with her and admitted, “I never felt like I was her dad, because I didn’t take her to school, change her nappies, there was no paternal thing there, but I’m trying.”

4. Roseanne Barr – Funny lady, Roseanne Barr, didn’t have such a humorous past. In fact, it was filled with poverty, sadness, and heartbreak. At the age of 17, Roseanne gave up her baby girl for adoption.  Barr admitted that she initially wanted to keep her daughter, but being an unwed mother, with no support made it extremely difficult. But, more than 18 years after giving up her baby, the mother and daughter have reunited.

5. David Crosby – In the early 60’s David Crosby and an ex-girlfriend gave up their baby boy for adoption. Fortunately, Crosby and his son, James Raymond, also a musician, reunited and Raymond has even shared the stage with his famous father.

6. Joni Mitchell – At the age of 21, folk singer, Joni Mitchell, became pregnant. She was financially unstable and didn’t want her parents to find out so she gave up her baby girl for adoption. She went public many years later in her quest to find her daughter, and the two shared a joyous reunion in 2001.

7. Andy Kaufman – The quirky comedian and subject of Jim Carrey’s film Man on the Moon had a child with his high school girlfriend but gave the child up for adoption. Kaufman rocketed to stardom on Taxi, but died in 1984. Little is known about the child today.

8. Kate Mulgrew – The Orange is the New Black actress was 21 when she gave her daughter up for adoption. She once told The Star News “I wouldn’t trade the experience. I also wouldn’t repeat it. It’s a lingering pain, a pain that will always be there.” The mother/daughter reunited in 2011.

9. Patti Smith – The signer was a, 19-year-old, high school dropout when she opted for adoption.  She wrote in her memoir, “Though I never questioned my decision to give my child up for adoption, I learned that to give life and walk away was not so easy.”

10. Mercedes Ruehl – She’s an Oscar and Tony Award-winning star, but Mercedes Ruehl is also a mom that’s given up a child for adoption. In 1976 Ruehl’s son, Christopher, was placed with adoptive parents, but the actress and her son reunited and Christopher is now the godfather of Ruehl’s second son, Jake.

11. Jay Thomas – Jay Thomas’s acting career was just getting started when he found out his girlfriend was pregnant. After many discussions about what to do they decided adoption was the best option.  “It was painful,” he says. “We talked about getting married, but I realized that we would have the kid and then get divorced, and I didn’t want that. I didn’t want him to be mixed up in a bad situation that was not of his making,” Thomas told People magazine. The father/son reunited in 2007.

12. Linda Lovelace – The deceased adult film star admitted in her autobiography “Ordeal” and in the TV program E! True Hollywood Story: Linda Lovelace (2000), that she got pregnant when she was nineteen and gave birth to a son “out-of-wedlock” when she was 20 years old in 1969. Her mother put him up for adoption.

13. Ted Nugent – According to the New Yorker gun activist and guitarist, Ted Nugent, gave two kids up for adoption when he was a teenager, a son, Ted, and daughter, Louisa.  The reality star has since reunited with both of his children.

Studies have shown that pornography can have devastating effects on people's lives, leading to infidelity, lewd behavior, sexual exploitation, … END_OF_DOCUMENT_TOKEN_TO_BE_REPLACED

According to Business Insider, podcasts have been surging in popularity over the last few years. Consumers are continuing to partake in this digital … END_OF_DOCUMENT_TOKEN_TO_BE_REPLACED