Celebrities tend to wear their voices on their sleeves when it comes to many issues. One hot topic that gets Hollywood talking is the abortion debate. We know of may pro-abortion celebs that regularly voice their opinion on the subject, but we don’t hear of many anti-abortion celebs sharing their views. 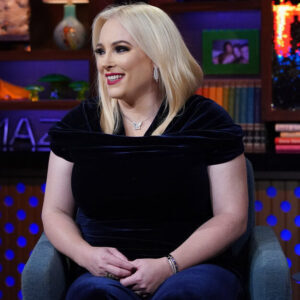 1. Meghan McCain – When Meghan McCain was on The View in 2018 she said she was “…intensively pro-life.” The expectant mom doesn’t think it’s the government’s job to legislate as she says it’s murder.

2. Kathy Ireland – Former model Kathy Ireland spoke at the Council for Life luncheon in 2011 and the model gave the keynote address. The CEO closed by reminding those gathered that “every child is wanted,” then referred to her niece with Down syndrome, and said, “God doesn’t make mistakes.”

3. Ashley Bratcher – Ashley Bratcher frequently stars in Christian films, and is best known for her portrayal of anti-abortion activist Abby Johnson in the 2019 film Unplanned. True to the film’s role, the actress and anti-abortion activist once told EWTN Pro-Life Weekly’s Catherine Hadro that she had a “sense of shame” about her pregnancy since she wasn’t married at the time, and spent “a lot of years keeping it a secret.” Bratcher said her role in the film made her realize that sharing her own story would “empower a lot of people to share and say, “I chose life.’”

4. Jessa Duggar – 19 Kids and Counting star Jessa Duggar participated in March for Life in 2015, a peaceful demonstration that protests abortion. The reality star posted on Instagram, “Headed to Little Rock right now for the annual March for Life! Join us at our state Capitol at 2pm, and together let us take a stand for the life of the unborn.”

Available at Amazon:  “What to Expect When You’re Expecting,” a helpful resource that answers all your questions about every phase of pregnancy.

5. Margaret Colin – Long-time actress Margaret Colin spoke with EWTN Pro-Life Weekly in an exclusive interview where she explained why she’s proudly pro-life. “I was always in the pro-life movement,” the actress proclaimed. “I’ve been very pro-woman and pro-child and very non-violent.” She’s also an honorary board member of the group feminist for non-violent choices. She said the early American feminist movement were pro-child and they “…never would consider separating a woman from the life of her child, ever…”

6. Pattie Mallette – Pattie Mallette became pregnant with her famous son, Justin Bieber, at 17, and has been an outspoken voice in the pro-life movement, even writing about her past in her 2012 memoir, Nowhere But Up: The Story of Justin Bieber’s Mom. When she was pregnant she was pressured into having an abortion when she became pregnant with Bieber, but refused. Mallette even produced a pro-life short film in 2013, Crescendo and in a statement said she hopes the film will “encourage young women all over the world, just like me, to let them know that there is a place to go, people who will take care of you and a safe home to live in if you are pregnant and think you have nowhere else to turn.”

Available at Amazon: Nowhere But Up: The Story of Justin Bieber’s Mom (Memoir)

7. Candace Cameron – When Candace Cameron was on The View in 2016 she and cohost Whoopi Goldberg talked about abortion when the topic of defunding Planned Parenthood was being hotly debated. Cameron stated that she was pro-life.

8. Patrica Heaton – Patricia Heaton is a very vocal anti-abortion advocate and is not afraid to express her beliefs. In a 2018 interview with Angelus News, The Middle actress expressed her passion for fighting for the disabled. The actress spoke specifically about Down syndrome and abortion declaring, “People with a specific disability are being targeted.” In 2017, Heaton called out a CBS Newsreport that said, “Iceland is on pace to virtually eliminate Down syndrome through abortion.” Sheresponded, “Iceland isn’t actually eliminating Down syndrome. They’re just killing everybody that has it. Big difference.”

9. Sunny Hostin – Fellow The View host, Sunny Hostin, also says she is pro-life and she believes abortion is murder but she said she would uphold the letter of the law, and would not legislate for abortion.

10. Elizabeth Hasselbeck – Another former The View host, Elizabeth Hasselbeck, is a vocal pro-lifer. A tense exchange between Hasselbeck and Barbara Walters in 2006 resurfaced in 2019. Hasselbeck apologized on her Instagram page for her part and for using profanity, then explained her abortion stance “…I was pregnant with Taylor and a big conversation about the value and the lives of the unborn took place at the View. It was a battle -but not of the flesh. I used fighting words because I believe that God decides the value of the lives of babies. We care for a group of Robin’s eggs in a nest before they are hatched and likely would think twice before stomping on the awesome blue shells because we know what God placed inside the hard womb…”

Available at Amazon: A variety of tools to help you, or a loved one, along your pregnancy journey.